The National Football League is trying to take over your life.

No, you don’t need to schedule an appointment with a psychiatrist, call ADT or contact your local bank branch to initiate preventative measures against fraud. Barring the windows is unnecessary, calling the 5-0 will result in laughter followed by the sound of a dial tone. The situation isn’t that dire. Like a girlfriend who becomes distraught at the fact that her boyfriend is departing for a five-day bachelor party in Las Vegas, the NFL just wants to spend some more quality time with you. That’s not such a big deal, is it? (Answer accordingly on the off chance that said girlfriend is reading this piece over your shoulder).

From the scheduling adjustment that will see the annual draft party take place in May rather than April to the persistent rumors of an 18-game regular season, from the expansion of contests played overseas in London to the increase in coverage of the Senior Bowl and Combine, the NFL has made its intentions abundantly clear: The most powerful sport in America wants to invade your space for 365 days a year. Forget about baseball, hoops and pucks. It’s Roger Goodell and his hard-hitting band of genetic marvels banging on your door 24/7.

Again, this isn’t a bad thing. The National Football League is a business and like any forward-thinking entity in this great country we call America, the NFL wants to increase profits while strengthening its brand. Those two mandates are furthered through the increase in coverage and expansion of product. The NFL is very good at what it does. If it weren’t, it would cease to be the NFL and would instead resemble something similar to Bud Selig’s Major League Baseball. 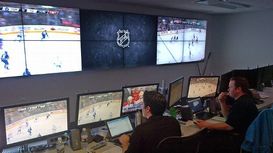 The NHL's "Situation Room" helps to take pressure off of on-ice officials.

While I’m not vehemently opposed to any of the NFL’s plans for world domination, I do feel that the league’s priorities could use a good reshuffling. And I believe that process should begin with the expansion of instant replay along with a change from the current review system to the one employed by the National Hockey League.

Before you scoff at the notion, spend some time thinking about the two biggest arguments employed against the expansion of instant replay:

1. More replays=longer games: How is this a problem? You’re telling me that it’s ok to increase the already excessive four months of draft coverage to four-and-a-half months, but an extra 5-10 minutes spent on regular season games to ensure accuracy is a major detriment to your schedule? You want to read and criticize an additional 131 mock drafts but can’t fathom the idea of 600 more seconds of game coverage? Let’s get real here. There’s a reason the NFL now plays games on almost every Thursday of the regular season and why “Countdown to Kickoff” clocks are appearing more and more unnecessarily around the internet. You love football and can’t get enough of it. More time watching games means less time doing something you were already neglecting to begin with.

2. Human error is a part of the game: This was true back in 1967, when owning a television was considered more lavish than our modern day households that consist of two iPads and three laptops. But times have changed and advancements in technology have kicked down doors that were previously perceived as unfathomable by the Baby Boomer generation. We have the technology to drop bombs on rival countries via unmanned drones operated by pimple-faced Prestige Call of Duty fanatics and the ingenuity to land a $2.5 billion rover on the Red Planet, but if an NFL head coach has run out of challenges, his team becomes completely vulnerable and subject to the mercy of the officials. With so much money at stake, why allow human error to be a part of the game when we have the capabilities to eliminate such a shortcoming altogether? Think of it this way: If the NFL were conceived in 2013, would the use of technology for instant replay still be limited?

None of this is meant to imply that the current replay system utilized by the National Football League is a failure. Far from it. The expansion of instant replay to cover all scoring plays (2011) and turnovers (2012) has improved the overall accuracy of officiating in recent years. But that doesn’t mean the league should give way to complacency and move on to more pressing issues.

Despite its multiple work stoppages since the turn of the millennium, the National Hockey League has a highly respected replay system in place that the NFL should consider borrowing from. When it comes to reviewing whether or not a questionable goal has, in fact, been scored, a team of officials located in Toronto is called upon to make the final determination, not the referees who are located on the ice. This process may take a couple of minutes, but the officials in Toronto have the advantages of a non-hostile working environment as well as large, high-definition television screens, rather than the little black box NFL officials are forced to use. 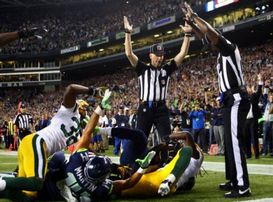 September 24, 2012: The Green Bay Packers fall 14-12 at Seattle on a Monday night after the replacement refs botch a last-second Russell Wilson Hail Mary attempt by ruling what was clearly an interception a touchdown. The same refs who blow the call handle the review and ultimately uphold the decision. Green Bay goes 11-5 instead of 12-4 and plays host to Minnesota during the Wild Card round of the playoffs instead of receiving a first-round bye followed by a Divisional Round home date with the San Francisco 49ers.

Had the NHL replay system been in place during last season’s Week 3 blunder at CenturyLink Field, there is no doubt in my mind that the officials reviewing the play from the NFL league office would have overturned the incorrect touchdown call, giving Green Bay the victory instead of Seattle. The benefits of working in a more placid environment with better technology would have prevailed, the correct call would have ultimately been made and a national uproar would have been avoided, all thanks to a couple extra seconds of due diligence.

And here’s the best part: Can anybody provide a good reason as to why a switch to the NHL’s replay system would be more of a detriment than an improvement?

Don’t suggest cost or additional manpower, because the NFL makes more than enough money to implement a project such as this.

And don’t say time, because we’ve already proven as a society that we are more than willing to watch anything and everything the National Football League has to offer.