After landing Asomugha, Eagles move to 9/1 to win Super Bowl

Friday afternoon’s explosive signing is already creating a ripple effect around the country. 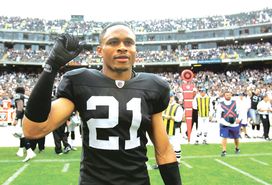 The arrival of Asomugha in Philly has been felt in Las Vegas.

The Philadelphia Eagles—who started the week at 12/1 to win the Super Bowl—are now listed at 9/1 over at Sportsbook.com after signing former Oakland cornerback Nnamdi Asomugha.

The defending champion Green Bay Packers (6/1) are still the favorite to win the NFC, while the New England Patriots (6/1) are the only team in the AFC listed above the Eagles.

After landing Asomugha, defensive end Jason Babin, cornerback Dominique Rodgers-Cromartie and backup quarterback Vince Young, should the Eagles be favored over the Packers to win the Super Bowl, or do you agree with where the odds currently sit?