Alabama and Oregon listed as co-favorites to win BCS Championship

And just like that, the Florida State Seminoles have staked their claim to a spot in the BCS Championship game.

The 51-14 drubbing the ‘Noles laid on previously unbeaten Clemson Saturday night vaulted Florida State to the No. 2 spot in the initial release of the BCS standings and third (3/1) on the odds board at the LVH sports book in Las Vegas, directly behind co-favorites Alabama and Oregon (3/2). In addition, Saturday’s performance by redshirt freshman quarterback Jameis Winston (22/32, 444 yards, three touchdowns) elevated the young signal-caller to the -150 favorite to win the Heisman Trophy at offshore sports book TheGreek.com.

In addition to the Seminoles…

Missouri Tigers (from 200/1 to 30/1): Moved to 7-0 on the season with a 36-17 home win over Florida on Saturday despite the loss of quarterback James Franklin. Back-to-back home games against South Carolina and Tennessee proceed back-to-back road dates at Kentucky and Ole Miss before the regular season finale at home against Texas A&M.

Stanford Cardinal (from 100/1 to 30/1): Rebounded from a disappointing 27-21 upset loss at Utah on October 12 to defeat the previously unbeaten UCLA Bruins 24-10 on Saturday. Travels to 6-1 Oregon State this weekend before a marquee home showdown with the undefeated Oregon Ducks on November 7.

Auburn Tigers (from 9999/1 to 60/1): Have ripped off three straight wins following a 35-21 loss at LSU on September 21, most notably of which was Saturday’s 45-41 upset win over Johnny Manziel and Texas A&M. Head coach Gus Malzahn has something cooking here, but the remaining schedule (vs. Florida Atlantic, at Arkansas, at Tennessee, vs. Georgia, vs. Alabama) is rife with pitfalls.

Clemson Tigers (from 12/1 to 200/1): Watched their National Championship hopes go up in smoke Saturday night during a 51-14 home thumping courtesy of the Florida State Seminoles. Chalk this odds plummet up to the fact that the Tigers are no longer in control of their own destiny, as the team now trails FSU in the ACC Atlantic division.

Louisville Cardinals (from 30/1 to 1000/1): When you play a cupcake schedule, you can’t expect to garner much respect from the rest of the country after dropping a Friday night home game to Central Florida.

Texas A&M Aggies (from 40/1 to 1000/1): Now 5-2 overall after Saturday’s loss to Auburn, the defending Heisman Trophy winner and co. are sitting fourth in the SEC West standings behind ‘Bama, Auburn and LSU. Even if the Aggies were to run the table (vs. Vanderbilt, vs. UTEP, vs. Mississippi State, at LSU, at Missouri), it’s highly unlikely the team will get anywhere near the National Championship game. Over bettors on the A&M season win total (9.5, -110) need a perfect finish to the season for a winning ticket.

THE ODDS (courtesy of the LVH sports book in Las Vegas) 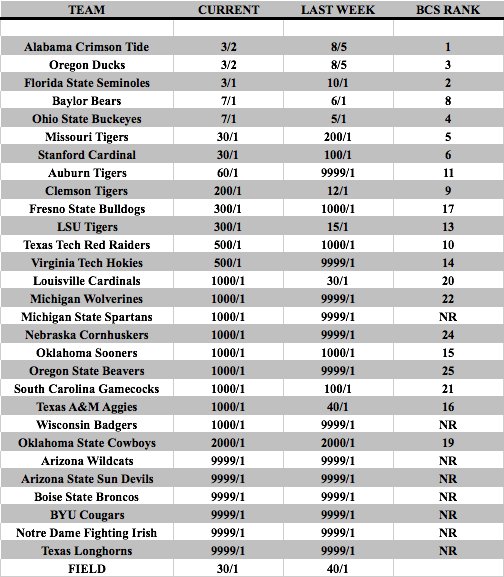