An example of why laser tattoo removal businesses exist

When your favorite professional football franchise posts an 82-126 record (.394) over a 13-year stretch that includes zero trips to the postseason, it becomes old hat to wallow in a pit of self-loathing. You’ve got to focus on the positive and remember the good times. For this particular Buffalo Bills fan, that means paying tribute to one of the organization’s nine members who have been enshrined in the Pro Football Hall of Fame. 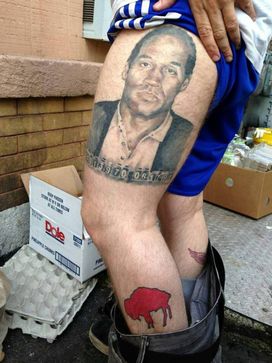 Of course, if that member happens to be running back Orenthal James Simpson, who some in America tend to associate more with this little double murder trial that took place back in 1995 over his Hall of Fame career with the Bills, then you might draw some suspicious looks from passersby—assuming you have your pants around your ankles.

Deadspin has the story (which was originally reported by the team at Sports-Kings) about how this particular Buffalo fan spent nine hours getting The Juice’s infamous 1994 mugshot tattooed on his left thigh.

Honestly, it’s beautiful work, from the O.J. tattoo to the picture taken in what appears to be a back alley dumpster.