I love this country. I really do. Americans know only one way in which to operate: Balls to the wall at 120 miles per hour with little regard for anything but pushing the needle further to the right. We do things in a big way, on the big stage, leaving the rest of the world in our dust. Jaws on the floor, hands on the head, eyes staring in disbelief.

The last few weeks have been particularly exceptional for our great nation. Never mind the ongoing war in Afghanistan, the Everest of national debt or the new tax rates that are cutting into our precious watering hole reserves. We gave the world the automobile, the iPad and Pebble Beach. In grandiose American fashion, we created the Atomic Bomb. To quote Moe Green, “The Corleone Family wants to buy me out? No, I buy you out, you don’t buy me out.”

That’s how we roll. To hell with those who aren’t on board. Enjoy life in the right hand lane while we go racing by. You’re saying I’m hurt and can’t recover in time for the playoffs? Bullshit. All I have to do is spritz a little Antler Spray underneath the old tongue and I’ll be back for my storybook ending. You’re telling me that hot chick on twitter is digging my vibe and wants to hook up? Who cares if we’ve never met? I’ll fall head over heels in love with her. That’s how I roll.

Ray Lewis and Manti Te’o, whether innocent or guilty, duped or complicit, have done their jobs in solidifying America’s role within the universe. If Planet Earth is the Hollywood of that galaxy of stars we gaze upon each night, then the United States is no doubt playing the role of National Lampoon.

And that’s preciously what we should take away from each of these fabulous tales of misadventure. Who cares if Lewis cheated and Te’o lied? This stuff is absolutely hilarious. Pure comedic gold. Just when I started to tire of the endless Te’o jokes running rampant on twitter, Lewis comes along and gives me Antler Spray. 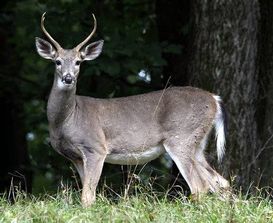 Forget about lifting weights. Just suck on this guy's antlers and you'll be able to knock down buildings.

Antler Spray. Are you kidding me? Think about those two words and what they have come to represent. Somewhere in this country is an asshat of an individual who is scraping deer antlers for the purposes of creating performance enhancing drugs. Congratulations, buddy. Your innovative accomplishment is akin to the first guy to pluck mushrooms out of animal excrement because he wanted to trip his balls off.

If Lewis is indeed innocent, then he’s caught a bad rap here and I apologize for laughing. But if he’s guilty, the guy has already served his time. With an ego that big, you know Ray Ray planned on milking every last drop out of his sunset ride into retirement during Super Bowl week. Instead, he’s answering questions about whether or not he used deer antlers to help repair his torn triceps. Now there’s a storybook ending for the ages.

And you thought Shawshank Redemption went out on a high note.

The same thing goes for Te’o. I don’t feel the least bit sorry that he was tricked by some scumbag degenerate who resides Southern California. YOU’RE A HEISMAN FINALIST AND THE STAR FOOTBALL PLAYER AT NOTRE DAME! Why the hell are you dating girls you’ve never met?

I can see why he lied. I’d probably lie in that spot, too. Although I’d have bigger problems at that point than whether or not I should tell the truth. I just spent more than a year getting romantic over the phone with some chick who turned out to be a dude…or whatever the hell actually happened there. Lying about everything would be the least of my concerns.

And just like Lewis, Te’o has served his time for indiscretions committed. That poor bastard had to go on Katie Couric’s show and face questions in front of the entire world about whether or not he prefers men over women.

Oh, America. The land of dreams. The country where we get serious with people we’ve never met. The place where the world’s biggest sporting event plays second fiddle to the healing powers Antler Spray, the greatest discovery since electricity.