Philadelphia Eagles wide receiver DeSean Jackson hasn’t been shy in regards to his desire for a new contract. As a second-round pick out of California in 2008, the young speedster quickly proved that the Eagles had found themselves a steal with the 49th overall pick in the draft. 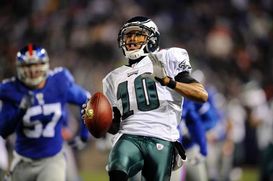 ICONNow that D-Jax has his deal, the Eagles will be expecting some big-time performances.

Four years later, Jackson’s hard work has paid off, as the Philadelphia Eagles announced on Wednesday that the team has come to an agreement on a five-year contract with the 25-year-old wideout.

“We are thrilled to be able to keep one of the NFL’s top playmakers in Philadelphia,” head coach Andy Reid said in a statement released by the Eagles on Wednesday. “DeSean is a game breaker, he has the speed and ability to score from anywhere on the field, and he has proven himself to be a big threat for our offense. Signing our own players was a big priority for us this offseason and DeSean was certainly high on our list. We are very excited about his future as an Eagle.”

Jason La Canfora of the NFL Network reports that the deal is worth $48.5 million.

While his statistics took a slight hit in 2011, Jackson should be ready to revert back to his old form now that his long awaited contract extension has finally arrived.