Barkley planning to start right out of the gate

USC quarterback Matt Barkley’s collegiate career ended on a sour note, with the preseason Heisman Trophy favorite playing the role of spectator during his team’s final two games of the 2012 campaign due to a separated shoulder.

Barkley’s planning to begin his pro career in much different fashion. 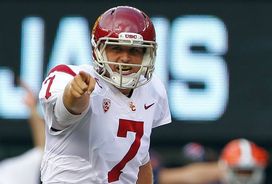 All eyes will be on Barkley during his March 27 Pro Day.

“I plan to start right away,” the 6-2, 230-pounder told the media at the NFL Combine in Indianapolis on Friday. “My goal is to be playing in September.”

Barkley’s late-season shoulder injury will prevent him from throwing at this week’s Combine, meaning his March 27 Pro Day will carry that much more weight. And if the 22-year-old wants to hear his name called during the first round of April’s draft, he’ll have to silence the critics who question whether or not he’s got the arm strength to make all the throws at the next level.

When asked during his Friday media session about the perception of Barkley lacking of an NFL-caliber arm, the quarterback simply responded, “I would disagree.”

We’re guessing there will be at least one or two teams who feel the same way come late April.