Barkley's skid stops in the fourth round

At one time considered to be potential first-round draft pick, USC quarterback Matt Barkley fell all the way to the fourth round before Chip Kelly and the Philadelphia Eagles brought a halt to the slide.

Philly selected Barkley (6-2, 227 pounds) with the first selection (No. 98 overall) of the fourth round on Saturday after trading up with the Jacksonville Jaguars to acquire the pick. 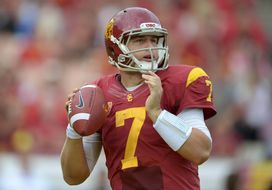 US PRESSWIREBarkley has found a home in Philadelphia.

One of the worst kept secrets of the draft, it was only a matter of time before the Eagles selected a rookie signal-caller. Many thought that West Virginia’s Geno Smith, Florida State’s E.J. Manuel or Arizona’s Matt Scott were the intended targets, but the Birds opted instead for Barkley.

Philadelphia still owns four more draft picks, with their next selection scheduled to take place in round five (No. 136 overall).