Barrett Ruud is headed to Tennessee 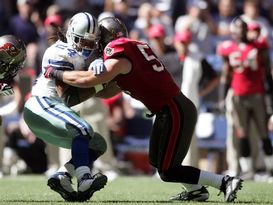 Per Jim Wyatt of The Tennessean, Ruud and the Titans have reached an agreement on a one-year deal.

In all likelihood, the six-year veteran is being signed to replace free agent linebacker Stephen Tulloch, who is looking to cash in on the career-high 160 tackles he recorded in 2010.