Be careful what you wish for

When a boat is taking on water, two options arise in regards to rectifying the situation: Assuming the resources exist, one can either patch the leak and attempt a journey to the nearest slice of dirt, or jump ship and hope for the arrival of the Coast Guard before it’s too late.

Despite a 7-6 record and a chance, albeit an infinitesimal one, of qualifying for the postseason, the San Francisco 49ers are taking on water at an alarming rate, a quandary that intensified Sunday afternoon following the team’s stunning 24-13 upset loss at Oakland. What was once a sea vessel of the most stunning magnitude has quickly transformed into a sinking slab of expensive parts no longer recognizable as the spectacular whole they used to comprise.

The problems in San Francisco range from inconsistent quarterback play to a middle-of-the-pack rushing attack, but at its very core involves a disconnect that pits CEO Jed York and General Manager Trent Baalke on one side of the divide and head coach Jim Harbaugh on the other. And due to an apparent unwillingness to secure the resources necessary to patch the leak, the 49ers appear headed for a swim in the frigid December temperatures of the nearby Pacific Ocean.

This is a grim situation for the 49ers franchise because head coaches like Jim Harbaugh are few and far between. 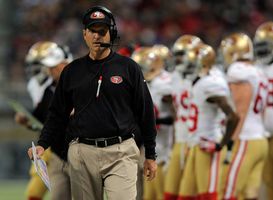 Since joining the 49ers in 2011, Harbaugh has won 71.6 percent of his regular season games.

In just under four seasons with the organization, the former Stanford head coach has compiled a regular season record of 43-17-1 (.716) and a postseason mark of 5-3 (.625) while guiding the 49ers to three straight NFC Championship game appearances and one trip to the Super Bowl. To put that into perspective, only the New England Patriots (47), Green Bay Packers (44) and Denver Broncos (44) have tasted victory more times in the regular season during that time span than the 49ers, with none of those clubs hoisting the Vince Lombardi Trophy since Harbaugh arrived in the Bay Area.

The past, however, is simply that and nothing more. What matters now is that the 49ers are preparing for life after Harbaugh because the two sides involved in this ever-growing rift have dug in their heels and opted to jump ship entirely rather than work quickly to identify the resources that may salvage a once great vessel.

This approach is no doubt alarming to the San Francisco faithful, who remember all too well what life was like in the eight years prior to the arrival of the “Captain Comeback.”

Before taking a chance on the hot-tempered, ultra competitive head coach from Stanford, the 49ers went eight seasons with neither a postseason appearance nor a winning record. From 2003-2010, this was a franchise that posted a 46-82 mark during the regular season (just three more wins than Harbaugh has produced in less than four years) under three head coaches (four, if you count Jim Tomsula’s two-game interim stint in 2010), each of whom was canned prior to reaching four full years with the organization. The 49ers were a model of both instability and inconsistency long removed from the legendary runs of the Bill Walsh and George Seifert eras.

Harbaugh, mind you, will be fine, as the soon-to-be 51-year-old will be rescued by his choice of more-than-willing vessels looking to snag one of the best and brightest in the business. In fact, Harbaugh’s resume speaks so loudly that he may not even have to hire a moving truck if the allure of the Silver & Black from across the bay turns out to be too much to pass up.

The 49ers, on the other hand, will cast aside a situation franchises like the New York Jets, Tennessee Titans, Tampa Bay Buccaneers, Jacksonville Jaguars and several others would willingly embrace if it meant experiencing a run similar to the one San Francisco has enjoyed over the last four years.

Honestly, you don’t think the Buccaneers would trade out of their current situation for the “problems” San Francisco is dealing with at the moment, especially if it meant playing in three straight NFC Championship games and one Super Bowl?

Of course they would. Because winning trumps all and while the 49ers may not be winning at the same rate now as they have over the last three seasons, that body of work should be more than enough to overcome the issues that have distracted the team from enjoying continued success in 2014.

But right now, none of that matters in San Francisco because the 49ers aren’t looking to patch the hole, they’re looking to jump ship.

Even if that means waiting another eight years for the Coast Guard to arrive.