Since 2010, only the Arizona Cardinals have surrendered more sacks (162) than the Chicago Bears (149). With a need the organization was desperate to address and a surplus of talent available on the market, it was only a matter of time before Bears general manager Phil Emery made a move. 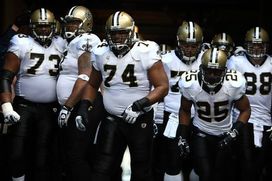 Bushrod (No. 72) has been nominated to the Pro Bowl in each of the last two years.

Three hours into the start of the new league year and quarterback Jay Cutler has a new left tackle to protect his blindside.

According to multiple reports, the Bears have come to terms on a five-year deal with former Saints offensive tackle Jermon Bushrod. The six-year veteran has started all 48 regular season games for the Saints since 2010, earning nominations to the Pro Bowl in 2011 and 2012.

Earlier reports indicated that the Bears made a big offer to free agent offensive tackle Phil Loadholt, who opted instead to re-sign with the Minnesota Vikings.

In Chicago, Bushrod will be reunited with offensive coordinator Aaron Kromer, who served as the Saints offensive line coach from 2009-2012.