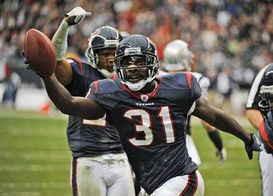 Bernard Pollard is headed to Baltimore.

After three seasons in Kansas City followed by a two-year stint in Houston, the 26-year-old free agent safety has reached an agreement with the Baltimore Ravens, per Sports Radio 610 in Houston.

A five-year veteran out of Purdue, Pollard is coming off a career-high 112-tackle season that included 2.5 sacks and four forced fumbles.

The Ravens have spent a good deal of their offseason addressing the backend of a defense that ranked 21st in the NFL against the pass last season. In addition to landing Pollard, the Ravens re-signed free agent cornerback Chris Carr and drafted cornerback Jimmy Smith (Colorado) with their first-round pick.