Through five weeks of NFL football, home underdogs are 17-11 against the spread (.607) after posting a 3-2 mark in Week 5 entering Monday night’s matchup.

And if it were up to Las Vegas bookmakers, that trend would hold true tonight. 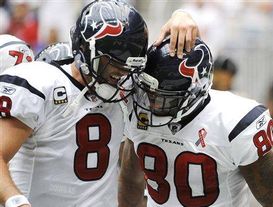 Matt Schaub and Andre Johnson have covered the spread in all four of their games this season.

Since the Houston-New York game hit the board early last week, a steady flow of money has been coming in on the 4-0 Texans, who also boast the league’s only undefeated mark against the spread this season.

“At the moment, it’s been all Houston money,” Cantor Race & Sportsbook Director Mike Colbert told the National Football Post Monday afternoon. “I don’t think the sharps buy back unless the line hits Houston -10.”

Houston opened as a 7-point favorite for Monday’s conference showdown with the Jets, but that line has been on the move and is now posted as high as -9.5 in Las Vegas and -10 offshore.

“It’s all Texans money, as the bettors are not interested in the Jets with this matchup,” Johnny Avello, the Executive Director of Race & Sports for Wynn Las Vegas told the NFP on Monday.”

Our own Sportsbook Spy indicates that approximately 72% of the bets placed for Monday’s game are coming in on the Texans, with 69% of the action backing the over (40.5).