Birdman wants to bet $5 million on the Pats, BetOnline says bring it

“They can’t help it, and I can’t blame ‘em
Since I got famous, but bitch, I got money to blow
I’m gettin’ it in
Letting these bills fall all over your skin”

--Lyrics from the song, “Money To Blow,” by Birdman

Which one is Birdman?

Last Monday, the co-founder of Cash Money Records tweeted that he wanted to bet $5 million on the New England Patriots to win the Super Bowl. Maybe he was serious or maybe he was just being boastful, but the guy who recorded the song, “Money To Blow” ended up getting called out.

In response to Birdman’s tweet, our friends at BetOnline.com quickly stepped up and offered to book every last penny of the action. 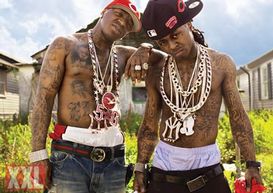 “Rap superstar @BIRDMAN5STAR wants to bet $5 million on the Patriots. If you are serious, we here at BetOnline.com want your action,” Dave Mason of BetOnline tweeted last Friday.

With six days to go until kickoff, Birdman has gone quiet in regards to the $5 million wager, which has prompted BetOnline to throw some fuel on the fire by offering a few prop bets on whether or not the rapper will step up to the plate.

PROP: Birdman excuse for not betting $5 million at BetOnline

PROP: Will Birdman show $5 million proof of bet in public?

"We were sure we’d hear from Birdman over the weekend, but not even a chirp," Dave Mason of BOL told the National Football Post Monday. "I still have plenty of faith, but our oddsmakers – not so much. They have him at +500 to actually place the $5 Million Super Bowl bet with us. The ‘no bet’ is -700. Hey Birdman, prove my handicappers and all of the doubters wrong, hit me up @DaveMasonBOL, we are ready to take this record-setting wager."

It’s a savvy business move by the guys at BetOnline. Not only has the news of BOL’s willingness to book a $5 million bet made its way around the internet, but if Birdman fails to follow through on his tweet, BetOnline is looking at a ton of exposure for calling the rapper’s bluff.

You also have to figure the guys over at BOL like the Giants to win Sunday’s Super Bowl since they’re apparently willing to book a $5 million bet on New England.