If you think the Seattle Seahawks got lucky on Monday night, try being a bookmaker.

That’s because somewhere between $150-$250 million changed hands worldwide when Seattle quarterback Russell Wilson’s Hail Mary interception on the final play of the Seahawks’ 14-12 win over the Green Bay Packers was mistakenly ruled a touchdown by the replacement officials at CenturyLink Field.

And if you think Packers fans are irate, imagine being the guy who lost his shirt on the NFL this weekend and decided to chase his money on Monday night with a big wager on the Packers.

Seattle entered Week 3 as a 3-point home underdog to Aaron Rodgers and the Packers, a line that attracted a lot of attention from the betting public.

“For the Wynn Las Vegas, the percentage mix on the game was 60% of the bets on Green Bay and 40% on Seattle,” Wynn Director of Race & Sports Operations Johnny Avello told the National Football Post on Tuesday. “Green Bay bettors obviously aren’t wagering anymore until the referee issue is resolved, so they say.” 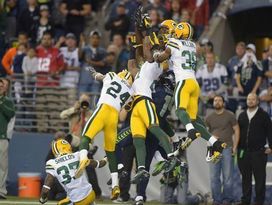 You can't see him, but according to the officials, Seahawks receiver Golden Tate caught this pass.

That number was significantly higher at other sportsbooks, both in Las Vegas and around the globe.

“The handle [amount bet] for last night’s game was on par with a typical Monday night game. In other words, it was very good.” Dave Mason of offshore sportsbook BetOnline.com told the NFP. “77% of the spread bettors were on the Packers last night. The majority of the money line action was also on the Packers, which went against the normal betting patterns. Usually when there is a spread right around three points, the money line bettors take the dog at plus money.”

“78% of the spread bets we booked came in on the Packers,” Sportsbook.ag’s Mike Perry told the NFP. “I’d estimate that somewhere between $200-$250 million changed hands on that play.”

Our friend R.J. Bell from Pregame.com estimates that approximately 68% of the spread bets placed worldwide on Monday night came in on the Packers, with somewhere around $150 million changing hands on the game’s final play.

“The last five minutes of that game made me sick to my stomach,” Cantor Race & Sportsbook Director Mike Colbert told the NFP Tuesday morning. “The Seahawks winning was a good result for us, so I’m not one of these people who lost money on a game and is complaining. We won the game and I’m telling you I got sick as a sports fan for what I saw happen on that field. It’s a total embarrassment and worst thing I’ve seen in my 25 years watching the NFL.”

Colbert’s not the only person livid over what transpired in one of the most controversial finishes in NFL history. Green Bay Packers offensive guard T.J. Lang took to twitter immediately after the game to let the world know what he thought about the final play.

“Got f***ed by the refs..Embarassing. Thanks nfl,” wrote Lang.

With Seattle’s win, home underdogs moved to 13-6 against the spread (68.42%) through three weeks of NFL action. And while Packers fans and Green Bay bettors may be up in arms over the chaos that took place on Monday night, Seattle backers thanked the gambling Gods after finding themselves on the right side of one of the worst calls in NFL history.

UPDATE (12:56pm eastern): Jay Kornegay, LVH Director of Race & Sports Operations, told the NFP that 85% of the tickets his shop booked came in on Green Bay, with 65% of the handle [amount bet] backing the Packers.