Before we get down to brass tacks, here’s a piece of advice from our good friend Vegas Runner of Pregame.com: If you’re going to bet the dogs, you might as well sprinkle a little something on the money line.

As you’ll soon find out, we’re taking this advice to heart once the calendar flips to 2013.

Analysis: Purdue concluded the regular season on a three-game winning streak to get bowl eligible, but those victories came against Big Ten doormats Iowa, Illinois and Indiana. Oklahoma State is a much different beast, ranking seventh in the nation in passing offense (333.4 yds/gm) and fourth in scoring (44.7 pts/gm). Take note that head coach Danny Hope is no longer running the show for the Boilermakers thanks to a disappointing 6-6 campaign. Purdue lacks the firepower on offense to keep pace and the playmakers on defense to get stops. The Cowboys should roll in this one. 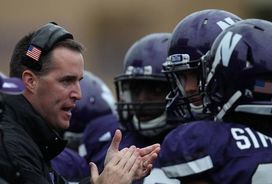 This is the year for Pat Fitzgerald and the Wildcats.

Analysis: Pat Fitzgerald’s crew has been money in the bank this season, going 11-1 against the number. As for motivation, the Wildcats haven’t won a bowl game since the 1949 Rose Bowl, so you know this team is going to show up prepared. Mississippi State dropped four of their final five contests and didn’t beat a quality opponent at any point during the regular season. This is the year that Northwestern finally breaks through.

Analysis: Bret Bielema—loser of three straight Rose Bowls—left for Arkansas and has been temporarily replaced by Barry Alvarez, who is looking to capture his fourth Rose Bowl crown. Stanford is an excellent football team that is more than capable of coming up roses in the big spot, but the Cardinal isn’t a squad that blows anybody out. In a tight matchup like this, we love the idea of getting six and the hook.

Analysis: The United States vs. the USSR, Tyson vs. Douglas, Villanova vs. Georgetown. What did all three have in common? Nobody gave the dog a shot in hell. We’re seeing the same thing here except for the fact that Florida State is no Mike Tyson. The Seminoles covered the number in just three of 12 posted games this season and beat the spread only once over their final six contests. Preparation and motivation both side with the Huskies for their first major bowl appearance, but do they have the talent to knock off the ‘Noles? We think they do, which is why a play on the money line is also worth your while. 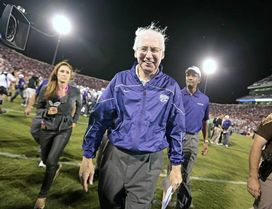 Bill Snyder has a month to figure out the Ducks.

Analysis: The Ducks have been very good to us over the last few years and the early opinion in Vegas is that Chip Kelly’s squad once again delivers for their backers. But as much as it breaks our heart, we’re going the other way in this one. Bill Snyder’s got a month to prepare for Oregon’s high-flying attack and the Ducks roster has to be concerned about whether or not Kelly will bolt for the NFL after this matchup. Those two factors, plus the nine points, are the reasons why we’ll take the Wildcats in addition to making another money line play.

Analysis: When was the last time a Bob Stoops football team showed up and won a big game? Yeah, that’s what I thought. This play has nothing to do with Johnny Football and his Heisman Trophy. It’s simply a play against Stoops and his not-made-for-TV football team.

Analysis: It wouldn’t be much of a bowl game betting primer if we failed to mention the biggest matchup on the board. Our hope here is that the public pushes this line through ten so we can pounce on the money line with Notre Dame. Nick Saban’s crew is the better football team and Notre Dame is getting very little respect. We think that could be a mistake.