It was only a month ago that the Denver Broncos were listed at 70/1 to win next year’s Super Bowl. With Tim Tebow at quarterback and a defense that ranked 20th in the league last season, the team was no doubt a long shot to bring home the Vince Lombardi Trophy. 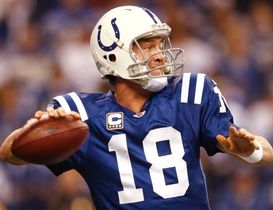 Manning's impact in Denver has already been felt in Las Vegas.

But as we’ve seen countless times before, things can change in a hurry in today’s NFL.

Las Vegas and offshore sportsbooks were forced to take a quick pause from March Madness on Monday due to the report that free agent quarterback Peyton Manning was set to sign with the Broncos. And now that the future Hall of Famer is scheduled to debut under center in Denver next season, the Broncos have emerged as a Super Bowl favorite.

In Las Vegas, the MGM sportsbooks now have the Broncos listed at 10/1 as well.

If we can offer one piece of advice, DON’T go out and buy yourself a ticket on the Broncos at 10/1. The value is long gone at this point, especially considering the fact that you could have bet Denver at 70/1 or 50/1 just a few weeks ago.