Broncos ship Gaffney to the 'Skins 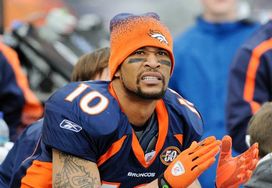 ICONIf you said Jabar Gaffney would be traded before Kevin Kolb, you just won the pool.

Following that, the ‘Skins signed 30-year-old wideout Donte Stallworth to a one-year contract.

And now, in their apparently never-ending quest to assemble one of the oldest receiving units in the league, the Redskins have traded defensive end Jeremy Jarmon to the Denver Broncos in exchange for 30-year-old wide receiver Jabar Gaffney, per Adam Schefter of ESPN.

Jarmon—a 23-year-old from Kentucky—was acquired by Washington in the third round of the 2009 supplemental draft. He’s only made one start over the last two years.

As for Gaffney, the former Florida product is coming off a career-high 65-reception season in Denver.

The deal marks the first trade that has been completed since the lockout was lifted.

Will the ‘Skins win more than six games this season? Discuss it now in the NFP Forums!