The AFC North takes center stage Thursday night as the Cleveland Browns travel to Heinz Field to take on the Pittsburgh Steelers.

76% of the action is currently coming in on the Steelers (-14), but keep in mind this little nugget from our friend Dave Tuley of View From Vegas.com:

We saw it happen last Sunday when the Colts kept it close at New England and we also got a glimpse of this trend in action back on November 14 when the 14-point underdog Buccaneers went to Lambeau Field and lost 35-26 to the Packers.

Can the Browns keep it close tonight or will the Steelers lay the wood to their AFC North rivals? Let’s break it down…

Analysis: Analysis: The Browns are just 3-7-2 against the spread this season, but have found a way to cover the number in two of their last three matchups. They’ll have to ride that momentum Thursday night in Pittsburgh against a Steelers team that has beaten them 19 times in their last 22 meetings. 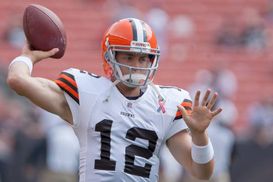 ICONColt McCoy has to step his game up if the Browns want a shot at upsetting the Steelers on Thursday night.

Pittsburgh has brought home victories in seven of their last eight games and is 4-2 against the line at home in 2011. But be advised that for as solid as this team has looked this year, the Black and Yellow is a shocking 1-6 ATS in their last seven games following an against the spread win.

If the Browns plan to make this a football game, they’ll have to figure out a way to score some points—something they haven’t been able to do much of in their last five trips to Heinz Field (11.8 pts/gm). Cleveland ranks 30th in the NFL in total offense (290.7 yds/gm) and 28th in scoring (14.6 pts/gm), so if there was ever a time for second-year quarterback Colt McCoy to break out and show us what he’s made of, tonight’s the night.

As for the total, 76% of the action for this game is coming in on the UNDER (40), but take note that the OVER is 7-1-1 in the last nine meetings between these two teams in Pittsburgh.