Buckeyes jump to 50/1 after Tressel's resignation

Jim Tressel’s headline-stealing resignation from the Ohio State University on Monday quickly made its presence felt in the southern Nevada desert. 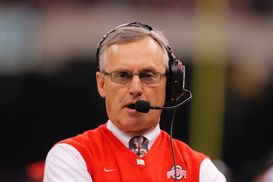 ICONThe sweater vest era in Columbus is officially over.

Having started the day at 25/1 to win the 2012 BCS title, the Buckeyes exploded to 50/1 at the Las Vegas Hilton after Monday’s stunning news out of Columbus hit the wires, per David Payne of Covers.com.

Ohio State was (and still is) listed at 14/1 over at Bodog.com, which is somewhat surprising considering the fact that five Buckeyes players are suspended for the first five games of the upcoming season. At one point, the 2012 odds on OSU actually dropped as low as 10/1 at the MGM Mirage, per Payne, as the sportsbook was taking in an abundance of action on the Big Ten powerhouse despite the suspensions.

After Monday’s developments, it could be a long time before Ohio State finds itself back in the hunt for a national title…no matter what the odds say.