One of my favorite aspects of working at the National Football Post is the interaction I get to have with the readers. Whether it be email, twitter or drinks in person down at the Golden Nugget, talking football with you guys and gals over the past four years has been my absolute pleasure.

And that includes those of you who love to bust my balls on Monday mornings after a fantasy recommendation of mine failed to meet the hype. Don’t get me wrong. I’ve got thick skin and don’t take the hate mail personally. But those of you who fancy yourselves as experts in the field of fantasy football now have a chance to prove it.

And if your knowledge is good enough, you’ll have the opportunity to make some serious cash playing.

Beginning in Week 1, Cantor will offer the Cantor 7, a fantasy football game that pits two teams of seven NFL players each against one another. Cantor will post somewhere between six and 12 Cantor Teams starting on Wednesday mornings. At that time, bettors are free to either come into the sportsbook or play online (if you download the app and are within the Nevada borders) to draft their own seven-man team. Cantor will then set a point spread for the matchup and the bettor will have the option of wagering on his team or on Cantor’s team.

“As soon as that line is created, we allow you to bet on your team or our team,” Cantor Race & Sportsbook Director Mike Colbert told the National Football Post Tuesday afternoon. “To let you know the number is fair, we don’t force you to bet on your own team. We do it right now for baseball with the Cantor 6. Some guys pick really bad teams and then after the line comes out, they bet the Cantor team.” 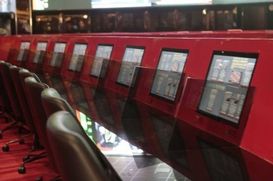 Betting terminals at the Cantor Gaming sportsbook inside the Venetian.

Rosters will include one quarterback, two running backs, two wide receivers (or tight ends), one kicker and one team defense. Players can wager to win up to $2,000 per bet (with -110 juice on both fantasy teams) and also have the option of passing on the point spread that Cantor has created. In fact, bettors can substitute players until they find a line they are interested in betting. (The scoring system is listed at the end of this article, with all official stats coming from NFL.com).

Here’s an example of how the process works:

The bettor thinks this particular Cantor Team is headed for a bad week. He picks them off the board and then drafts the following players: Aaron Rodgers, LeSean McCoy, Ray Rice, Brandon Marshall, Victor Cruz, David Akers and the Houston D/ST.

The player feels his team will crush the Cantor Team, so he places a bet on the team he drafted.

Bettors will have from Wednesday morning until Sunday morning before kickoff to draft teams and place wagers. However, you aren’t allowed to draft a team that features more than one player who has already been drafted on the Cantor Team you selected. In addition, if one player from either team is ruled out for that week’s game, the bet is no action and wagers will be refunded.

Cantor is making this game as easy as possible to play. While you have to fund an account in person at one of the company’s properties, you’ll never have to step foot inside the sportsbook again (assuming you don’t go bust). Bettors can draft teams and make wagers from computers, cell phones and tablets, as long as they are within the Nevada borders and have downloaded the app.

“We’re all about account wagering,” said Colbert. “We think that betting at the sportsbook counter is a thing of the past. We still take bets at the counter, but this stuff is all done electronically. For a product like this to be really popular, you have to let people play from home. You can’t make them come to the casino for this stuff. They want to do it from the comfort of their home or when they’re out and about.”

I’ll be putting the Cantor 7 to the test in a few weeks and will post my team, Cantor’s team and the spread online for you guys to examine.

And then I’ll wait patiently for all the Monday morning emails calling me an idiot.

Each quarterback, running back, wide receiver or tight end earns: