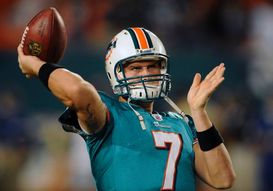 The Seahawks and Jaguars are currently interested in Chad Henne's services.

In addition to drawing interest from the Jacksonville Jaguars, Henne will visit the Seattle Seahawks, per Jeff Darlington of the NFL Network.

Having been eliminated from the Peyton Manning sweepstakes without even landing a visit from the highly coveted free agent quarterback, it doesn’t come as a major surprise to learn that Seattle is interested in Henne. Tarvaris Jackson and Charlie Whitehurst haven’t shown they have what it takes to take the Seahawks to the next level and head coach Pete Carroll always seems to be interested in upgrading the quarterback position.

Henne’s 2011 campaign was cut short after just four starts due to a shoulder injury. His best season came in 2010, when the former Michigan product completed a career-high 61.4% of his passes for 3,301 yards and 15 touchdowns.