The lines in Vegas get tougher to crack as the NFL season progresses.

This isn’t just due to the fact that we’ve seen these teams play for over four months. With only two games to worry about and knowing that the public will be betting heavy on each, bookmakers pay extra attention to the lines they release for the AFC and NFC Championship games. When you factor in all of the betting that will go down on Sunday, it makes it all the more critical to release the sharpest lines possible.

Only two games remain before the Super Bowl, so I’ve got to come up aces this weekend in order to turn my record around heading into the biggest Sunday of the season.

CLICK HERE for the AFC and NFC Championship game lines.

X-factor: Ravens quarterback Joe Flacco. With eight career postseason starts under his belt, the time is now for Flacco to take his team to the Super Bowl. The Patriots finished the regular season ranked 31st in the NFL in pass defense, meaning Flacco will be in for a tumultuous offseason if he fails to deliver on Sunday.

The rundown: From the looks of things in Las Vegas, it appears as if the professional bettors will be backing the Ravens on Sunday. With the number sitting at New England -7.5, sportsbooks across town were hit with a wave of Baltimore money on Wednesday afternoon that forced a half point movement to the key number of NE -7.

The Ravens are just 1-2 against the Patriots since Joe Flacco entered the league in 2008, but that lone victory was a big one as Baltimore pounded New England 33-14 in the wildcard round of the 2009 season. The Patriots were able to exact a small piece of revenge the following October, defeating the Ravens 23-20 in Foxborough. 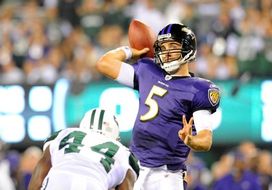 The key to predicting this game will be forgetting everything you saw last week. Flacco may have looked inconsistent against the Texans, but Houston ranked third in the NFL in pass defense this past season, which is a far cry from a New England team that finished the year ranked 31st.

As for the Patriots, busting up Tim Tebow and the Broncos is one thing, but finding ways to move the football against Ray Lewis and Ed Reed is a much different story. New England quarterback Tom Brady will feel the heat early and often in this one, meaning he’ll have to unload the football in a hurry in order to avoid a repeat of what happened at Heinz Field against the Steelers back in October.

The home team is 4-1-1 against the spread in the last six meetings between these two teams, while the Ravens are just 1-3-2 ATS in their last six games at New England.

Matchup to watch: Rob Gronkowski and Aaron Hernandez vs. Baltimore’s safeties and linebackers. The Patriots went 11-0 in 2011 when Hernandez amassed at least 40 receiving yards.

The pick: I’m one of the biggest Tom Brady supporters on the planet, but this point spread appears to be a bit high when you take into account how bad New England’s defense has looked at times this season. Despite all of that, I think the Pats pull this one out, 27-24.

X-factor: Giants running backs Ahmad Bradshaw and Brandon Jacobs. New York has rushed for 95 or more yards in each of their last four games (4-0). When the team has failed to reach the 95-yard mark, Big Blue is just 2-6.

The rundown: The action came in early and often on San Francisco last Sunday night as Vegas bookmakers opened the NFC Championship anywhere from a pick to SF -1, but were quickly bet up SF -2.5, which is where the number currently sits.

Eli Manning looks to lead the Giants back to the Super Bowl, but a formidable opponent is standing in his way.

The 49ers went 7-0-1 against the spread at home during the regular season, which includes a 27-20 win over the Giants back on November 13. But this isn’t that same New York football team. Big Blue has ripped off four straight wins and is playing with a swagger reminiscent of their 2008 Super Bowl run.

For the Niners to advance to the Super Bowl in head coach Jim Harbaugh’s first year at the helm, they’ll have to continue doing what got the team to this point: Play solid defense and protect the football. San Francisco has turned the ball over only one time in their last six games and has allowed just one opponent (New Orleans) to score more than 27 points. In fact, the 49ers have held the opposition to less than 20 points in 11 games this season.

The pick: Whether it be straight-up or against the spread, this is one of the toughest matchups to predict this season. I’ll ride that New York swagger and will take the G-Men to come out on top 20-17.