How the Jacksonville Jaguars wound up with two home Monday night games this season is a mystery in itself, but our focus this afternoon lies with where we can extract some potential value in the point spread for this prime time showdown.

The Chargers have been abysmal as of late. They’ve lost six straight games and reports out of Southern California indicate that general manager A.J. Smith and head coach Norv Turner are dead men walking. San Diego hasn’t covered a spread since October 9 against the Denver Broncos, but that hasn’t stopped 75% of the public from backing the Bolts on Monday night.

Is the public on the right side or will the Jaguars rise up like they did against the Ravens back on October 24 and deliver a pleasant early-week surprise for Las Vegas bookmakers?

Jimmy Vaccaro, Director of Race & Sports Operations, Lucky’s Race & Sports Book: “The Chargers have been burning money for their followers the last few months and tonight what you’re seeing is a little less attention on the game only because the Chargers aren’t doing that well. The general public would love to bet on the Chargers, but they’ve been getting butchered on this team and are holding out a little more than they normally would. 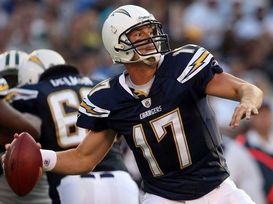 Philip Rivers and the San Diego Chargers are scoring just 22.6 points per game this season (15th in NFL).

In previous years, a Monday night game with the Chargers playing a hapless team would be a one-way attack starting Sunday night, with people betting the Chargers on their way out of town. But this is not the same Chargers team. Most Nevada books will definitely need the underdog to show up tonight, but not near the severity of the days when San Diego used to blow people out.

It’s possible the wiseguys come in on Jacksonville at +3.5, but you’ve seen nobody step up to the window that you would consider a sharp guy or an advantage player take the Jags at +3. Those guys will definitely not jump in until they at least get the hook in this football game.

There used to be a time when the Chargers’ totals started in the mid-40s and were bet over. But it’s very apparent here that San Diego doesn’t have the same firepower that they’ve had in the last few years and obviously they’re playing a team that can’t put the ball across the goal line.

This game will probably be one of the least popular Monday night games to be booked in quite a while.”