Chiefs get a steal in Mike DeVito

Big-name signings like the Mike Wallace-to-Miami blockbuster will dominate the headlines at the conclusion of free agency’s first day, but deals such as the one Kansas City pulled off on Tuesday will deserve far more praise. 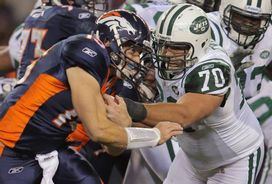 The Chiefs got some exceptional value with the DeVito signing.

Per multiple reports, the Chiefs have reached an agreement on a three-year deal with former Jets defensive end Mike DeVito. The contract is worth a total of $12.6 million and comes with $6.2 million guaranteed.

Far from a household name, DeVito is a rock solid 3-4 defensive end who amassed 52 tackles in 15 starts with New York last season. According to Pro Football Focus, the 28-year-old from Maine graded out as the tenth-best 3-4 DE in 2012.

It may not be the sexiest of signings to come on Tuesday, but it has the potential to be one of the most productive. The acquisition adds to an already impressive offseason for Kansas City, who traded for quarterback Alex Smith, re-signed wide receiver Dwayne Bowe and punter Dustin Colquitt and slapped the franchise tag on offensive tackle Branden Albert.