Compensatory draft picks are given to clubs who are determined to have lost more or better compensatory free agents than it acquired during the previous year. The formula takes into account factors such as playing time, salary and postseason accolades. The formula does not cover every free agent lost or acquired.</p>

As an example, the Pittsburgh Steelers acquired one compensatory draft pick (sixth round, No. 206 overall) after losing cornerback William Gay last season. The Steelers did not acquire any players who fall under the league's formula for determining compensatory choices, so the team was given an additional sixth-round selection.

Teams who qualify for compensatory selections are eligible to receive a minimum of one and a maximum of four additional picks. These selections cannot be traded, which is the only guarantee anybody has during the NFL draft.

Below is the complete breakdown of each compensatory pick that was awarded on Monday, as well as the players who were lost and acquired during the previous year that led to these additional selections. 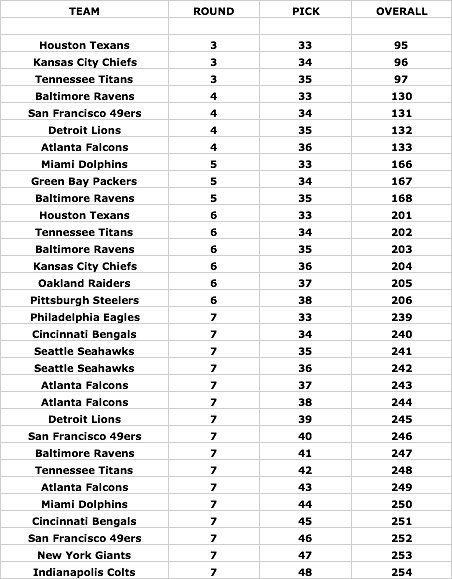