The New York Jets threw in the towel on the Tim Tebow experiment Monday, releasing the three-year veteran 13 months after sending two draft picks to the Denver Broncos in exchange for the 2007 Heisman Trophy winner. The move was expected and therefore didn’t come as a surprise. Yet somehow, an NFL franchise’s decision to part ways with a backup quarterback who attempted just eight passes in 2012 has generated more buzz then anything happening in the NBA, NHL or Major League Baseball at the moment.

This is a problem. And it’s a problem that helped contribute to the New York Jets’ dismal 6-10 campaign last season.

Tim Tebow is the most polarizing figure in professional sports. Whether he’s lining up under center, standing on the sidelines holding a clipboard or throwing passes shirtless in the rain, the media is going to talk about him. Tebow coverage moves the meter and drives ratings.

It also serves as a major distraction for the organization that signs Tebow’s checks each week.

Take a look at the San Francisco 49ers, Baltimore Ravens, Denver Broncos, Atlanta Falcons, Green Bay Packers and New England Patriots and ask yourself how those teams differed from the Jets in 2012. You will immediately notice that those six organizations made the playoffs last season while the Jets were flopping around like a chicken with its head cut off. You’ll also realize that those six teams did so without the national headline-making distractions that the New York Jets welcomed with open arms to their franchise in March of 2012.

No professional sports organization is without distractions, but it’s the job of the front office and coaching staff to limit their magnitude. Having Tim Tebow on the roster isn’t a problem for a team with a quarterback who is firmly entrenched as the starter. But when the inconsistent Mark Sanchez is the guy tasked with leading your offense down the field and fails to do so, having Tim Tebow on your roster becomes a problem.

New York Jets general manager John Idzik is trying to get the Gang Green train back on the tracks. The top of his to-do list reads, “Solve quarterback issue.” Idzik began to remedy this problem over the last few days by using the 39th pick in the draft to select West Virginia quarterback Geno Smith on Friday. He then handed Tim Tebow a pink slip on Monday. 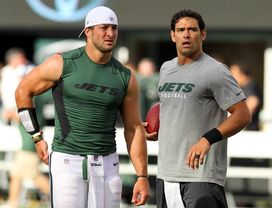 US PRESSWIREThe Jets shouldn't stop with Tebow. Now that Geno Smith is on the roster, it's time for Mark Sanchez to go.

Those two moves are a good start. The Jets now have a talented young signal-caller on the roster that they can work to develop and are free of the media circus that follows Tebow from city to city. Addition by way of subtraction.

But Idzik shouldn’t stop there. He should continue the quarterback purge by dumping Mark Sanchez.

In the immediate aftermath of the Geno Smith selection, the speculation commenced as to whether or not Sanchez’s tenure in New York had come to an end. Newsday’s Bob Glauber reported on Sunday that the organization plans to retain Sanchez into the preseason. This is a mistake.

The only reason Sanchez hasn’t been canned is because doing so will cost the Jets $8.25 million and the team isn’t ready to bite that bullet. That’s understandable, but only if the Jets realize that keeping Sanchez around will serve as yet another distraction for an organization that should be doing everything in its power to avoid distractions. The Jets have seen plenty of Sanchez tape over the last four years. They know damn well that he isn’t the long-term solution to any problem that begins, “How do we win the Super Bowl?”

The Jets don’t need five arms to make it through the preseason. A depth chart that features Smith, David Garrard, Greg McElroy and Matt Simms is plenty.

But suppose the Jets ride with Sanchez through the preseason and the quarterback plays well enough to win the Week 1 starting job. Then suppose Sanchez plays well enough to keep the job. What happens next? The speculation begins that the Jets shouldn’t have wasted the 39th pick on Geno Smith when the team could have drafted another offensive weapon to help Sanchez. The front office is now being criticized for the move and is once again stuck with Mark Sanchez under center, while their rookie signal-caller is standing dejectedly on the sidelines.

The Jets shouldn’t give this possibility—however remote—a chance to become their reality. The release of Tebow on Monday has eliminated a major distraction from the roster. Now do the same with Sanchez before training camp opens in July and start looking towards the future. Getting nothing in return for the costly sum of $8.25 million won’t be an easy pill to swallow, but it’s a necessary hit the Jets need to take in order to eliminate the distractions that helped plague the organization in 2012.