Cooley may not be ready for Week 1

After tearing the meniscus in his left knee last season, Redskins tight end Chris Cooley is still trying to work his way back to 100%. 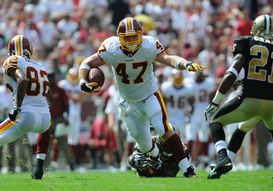 Unfortunately for the quarterbacks in Washington, he may not reach that target by the start of the season.

Redskins head coach Mike Shanahan told reporters on Sunday that Cooley’s status for Week 1 is in doubt as the seven-year veteran continues to battle a lingering knee injury, per a tweet from Rich Campbell of the Washington Times.

Cooley had fluid drained from the knee over a week ago and even saw a specialist last Wednesday, but missed Friday’s preseason game against the Pittsburgh Steelers.

Should the 29-year-old be unable to go in the Redskins’ season-opener against the New York Giants, three-year veteran Fred Davis would get the start.