Two of the NFL’s hottest teams clash in Big D Thursday afternoon as the Miami Dolphins—who have covered four straight spreads—head to JerryWorld to take on a Dallas Cowboys team that has covered the number in four of their last five outings. 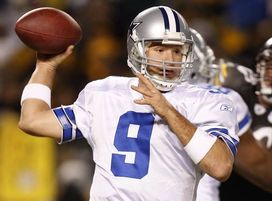 Romo and the Cowboys look to stay hot against a suddenly surging Dolphins team.

The linesmakers in Las Vegas got this one right, as the Cowboys opened as a 7-point favorite Sunday evening and have held steady through the week. With just over two hours remaining until kickoff, the Cowboys are still listed at -7 all over Las Vegas as well as offshore. 68% of the public is currently backing a Dallas team that is 2-9 against the spread in their last 11 games as a favorite of 3.5-10.0. Be advised that Miami is 13-5-1 in their last 19 road games.

Not surprisingly, 70% of the public is currently backing the OVER, but take note that the Dolphins have only seen one game go OVER this season and that came back in Week 1 against the New England Patriots.

With this game sitting on the key number of 7, be sure to buy the half point no matter which team you decide to back.