D’Qwell Jackson missed the entire 2010 season with a torn pectoral muscle that left the talented linebacker with just six starts over a two-year period. Frustration no doubt set in and Jackson’s stellar 2008 campaign quickly became nothing more than a distant memory. 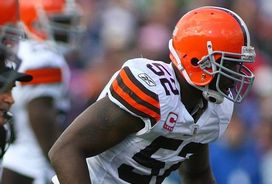 But after bouncing back in a big way in 2011 with an AFC-best 158 tackles, the 28-year-old from Maryland effectively relegated that aforementioned two-year stretch to the distant memories pile in the eyes of the Cleveland Browns front office.

Jackson’s hard work has paid off as the organization has scheduled a press conference for 3:00pm eastern to announce that the two sides have reached an agreement on a new contract.

A second-round selection out of Maryland in 2006, Jackson has started 64 games for the Browns over the last six years and is coming off a 2011 campaign that saw the linebacker set career-highs in tackles, sacks (3.5) and fumble recoveries (3).