The National Football Post’s Draft Trends series resumes Thursday as we look to complete our earlier study of the AFC North.

CLICK HERE to check out Part I of the AFC North Draft Trends study.

Of the ten first round picks the Cleveland Browns have made since 2001, only three of those players remain on the roster (Thomas, Mack, Haden). Take note that Cleveland has focused more on the offensive side of the football over the last decade and has not drafted a defensive lineman with their first selection since 2001 (Warren). That’s something to keep in mind as several mock drafts project North Carolina’s Robert Quinn to end up in Cleveland. 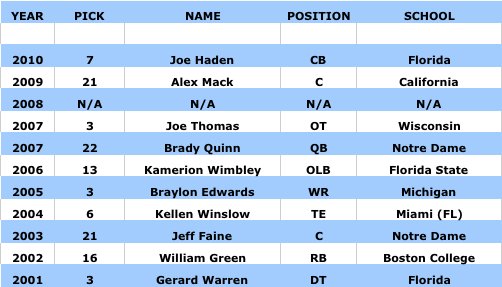 A closer look reveals that the Browns have spent 24% of their draft picks since 2001 on wide receivers and running backs, but have used just 14.7% on offensive linemen. Over the last ten years, the Browns have drafted just as many quarterbacks (4) as they have offensive tackles.

Here’s how the Browns’ selections break down by position since 2001: 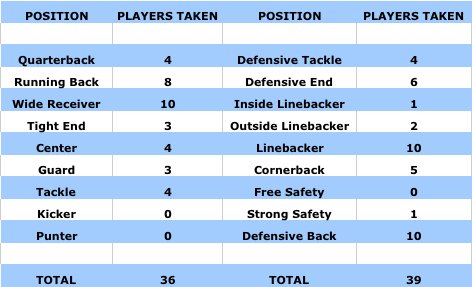 1. Since 2001, the Browns have drafted only three offensive linemen within the first two rounds. 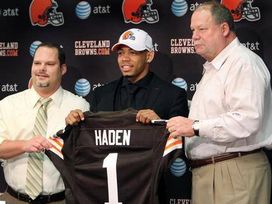 Joe Haden is one of the few first round picks still on the Cleveland roster.

2. Prior to drafting Montario Hardesty (Tennessee) in the second round last year, the Browns had not selected a running back earlier than the fourth round since they grabbed William Green (Boston College) with their first pick (No. 16 overall) back in 2002. Green lasted only four years in the NFL, posting a 3.7 yards per carry average for his career.

4. Since 2001, the Browns have selected only two defensive linemen within the top 100 picks.

The Bengals sure love the powerhouse college football conferences. If you played someplace other than the SEC, Pac-10, Big Ten or Big 12, don’t expect the Bengals to call your name during the first round. 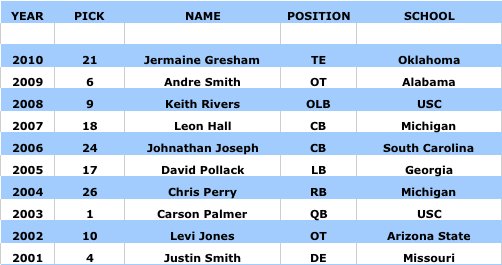 No position has been targeted more frequently in Cincinnati over the past ten years than wide receiver. The Bengals have selected 14 wideouts since 2001, but interestingly enough, their top receiver last season was acquired via free agency (Terrell Owens).

Here’s how the Bengals’ selections break down by position since 2001: 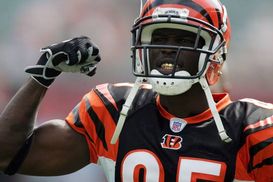 Ochocinco was a second round selection back in the day.

2. If the Bengals are going to select a tight end, it’s going to happen during the first half of the draft. Since 2001, four of the five tight ends selected by the Bengals have come within the top 100 picks.

5. The Bengals have selected at least one linebacker within the first four rounds in five of the last seven years.