The Indianapolis Colts have only possessed eight first round picks over the last ten years, with just one of those choices coming prior to the 24th selection. Since 2001, the Colts have not drafted an offensive lineman, defensive tackle or linebacker in the first round, but have spent three of their last four choices on either running backs or wide receivers. 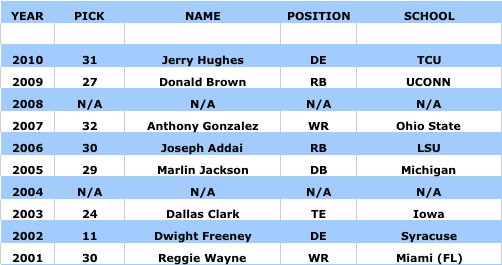 Over the last ten years, Indianapolis has been a team focused on the defensive side of the football, with 57.8% (48) of their selections going towards defenders. More specifically, the Colts have used 28.9% (24) of their last 83 draft picks on defensive backs.

Here’s how the Colts’ selections break down by position since 2001: 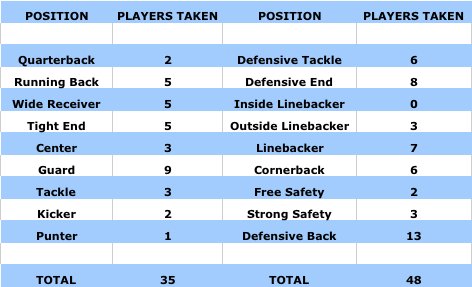 1. Since 2001, the Colts have drafted only three offensive tackles. To put that in perspective, take note that over the last ten years the team has spent the same amount of selections on kickers and punters (3). 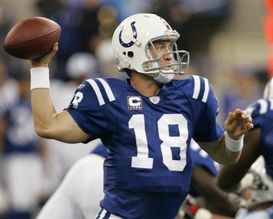 At 35 years old, is it time for the Colts to look for Manning's replacement?

2. Since 2001, the Colts have drafted only two offensive linemen within the top 100 picks.

3. Outside of first round selections Reggie Wayne (2001) and Anthony Gonzalez (2007), the Colts have not selected a wide receiver within the top 100 picks.

5. Since drafting Peyton Manning back in 1998, the Colts have only selected two quarterbacks, with neither being chosen prior to the sixth round.

If the Jaguars don’t plan on targeting a player from the west coast in the first round, chances are the selection could come from somewhere within close proximity to their home facility, as seven of the their last ten first round picks have played their college ball within 750 miles of Jacksonville. 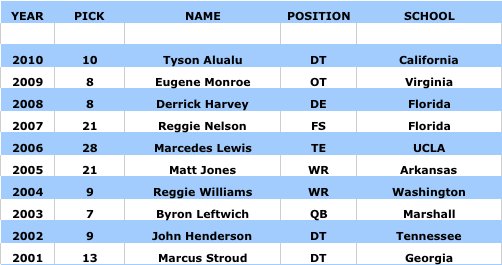 The Jaguars have been pretty balanced in the usage of their 83 draft picks over the past ten years, but have targeted wide receivers (14.5%) and defensive linemen (20.5%) more than any other position.

Sadly, of the 12 wideouts the Jaguars have drafted since 2001, none of them have earned a trip to the Pro Bowl.

Here’s how the Jaguars’ selections break down by position since 2001: 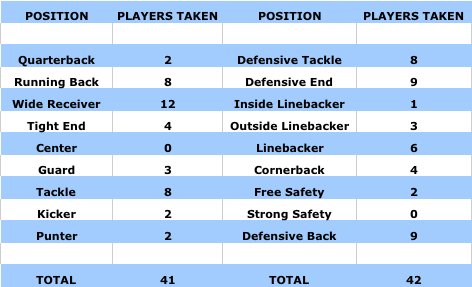 1. Of the eight defensive tackles the Jaguars have drafted since 2001, five have been selected within the first three rounds.

ICONMJD is one of only two running backs the Jaguars have selected prior to the fourth round since 2001.

2. Over the last ten years, Jacksonville has selected eight running backs, but only two (Maurice Jones-Drew, Greg Jones) have been drafted prior to the fourth round.

3. Of the eight offensive tackles the Jaguars have drafted since 2001, five have been selected within the top 100 picks.

4. Since 2001, the Jaguars have drafted nine defensive ends, but only two (Derrick Harvey, Quentin Groves) have been selected within the top 100 picks.

Since taking over as head coach of the Houston Texans in 2006, Gary Kubiak has selected defensive players with four of his five first round draft picks. Following those selections, Houston has ranked 22nd or worse in total defense in four of the last five years.

Overall, the Texans have gone defense with seven of their last eight first round picks. 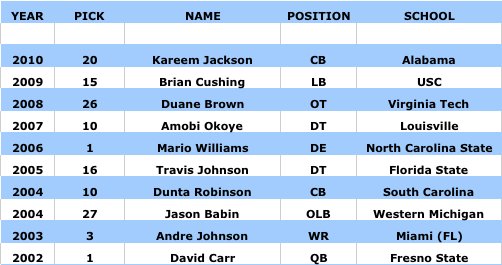 Once you get past the first round, it becomes obvious that the Texans have tried to stay balanced with their 77 career draft picks. The team has spent 20.8% of their selections on running backs and wide receivers and another 22.1% on defensive backs.

Despite drafting five quarterbacks over the last nine years, the most successful signal-caller in franchise history (Matt Schaub) was acquired via trade.

Here’s how the Texans’ selections break down by position since 2002: 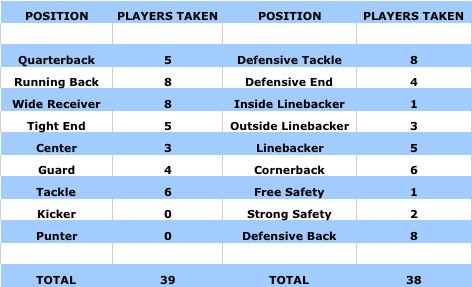 1. Since Gary Kubiak took over as head coach in 2006, the Texans have drafted exactly 19 offensive players and 19 defensive players. 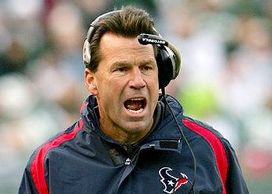 2. Houston has never drafted a kicker or a punter.

3. In five years as head coach, Kubiak has only drafted one offensive lineman (Duane Brown) prior to the third round.

The 2011 NFL draft will mark the first time in 17 seasons that Jeff Fisher is no longer calling the shots as head coach of the Tennessee Titans. Fisher’s first draft pick back in 1995 was none other than Alcorn State quarterback Steve McNair.

Interestingly enough, new head coach Mike Munchak enters the 2011 NFL draft just like Fisher did back in 1995: In need of a starting quarterback.

Take note that the Titans have not drafted an offensive lineman in the first round since 1993, which was two years prior to when Fisher took over as head coach. 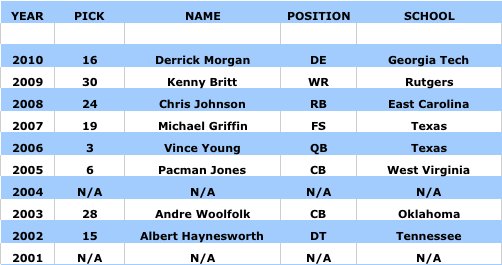 Of all the teams we’ve covered so far in the NFP Draft Trends series (see links below), no organization has made more draft picks since 2001 than the Tennessee Titans. Tennessee has actually selected ten or more players in six of the last ten drafts.

Upon further inspection, you’ll notice that former head coach Jeff Fisher spent 18.1% (17) of his draft picks on the wide receiver position over the last ten years.

Here’s how the Titans’ selections break down by position since 2001: 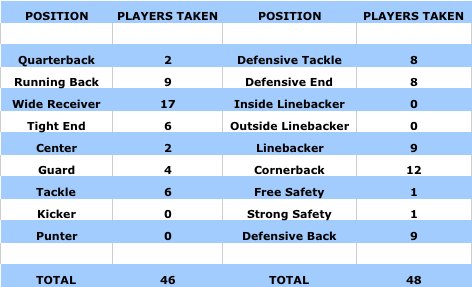 1. Since 2005, the Titans have selected an average of 2.0 wide receivers per draft. Tennessee has landed at least one wideout in each of the past six drafts and has selected as many as three wide receivers two times in the last six years. 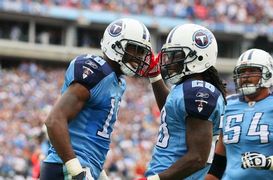 ICONKenny Britt (left) is one of 17 wideouts the Titans have drafted since 2001.

2. Over the last ten years, the Titans have drafted only one offensive lineman (Michael Roos, 2005) prior to the fourth round.

3. Since 2001, the Titans have only drafted two linebackers (Rennie Curran, Rocky Calmus) prior to the fourth round.

5. Seven of the 16 defensive linemen (43.7%) drafted by the Titans since 2001 have been taken within the top 100 picks. That falls within .8% of the league average during the same time span.

CLICK HERE to check out the AFC West Draft Trends

CLICK HERE to check out the AFC East Draft Trends.