With the possible exception of the New England Patriots, no team likes to wheel and deal more on draft day than the Eagles. The Philadelphia front office has traded up or down in the first round in six of the last eight years, so don’t be surprised if the Birds are drafting somewhere other than the 23rd selection on opening night. 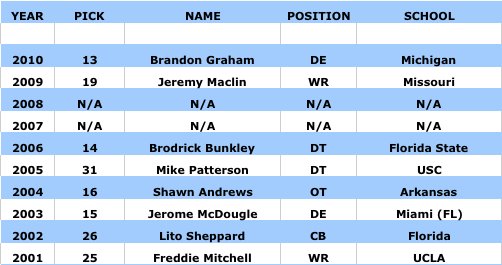 The upside of all that draft day trading is that the Eagles have done an excellent job stockpiling picks over the last decade, as no team in the NFC East has selected more players since 2001 than Philadelphia.

Take note that since 2001, the Eagles have used 31.8% of their draft picks on linebackers and defensive backs, which are two of the team’s biggest needs in 2011.

Here’s how the Eagles’ selections break down by position since 2001: 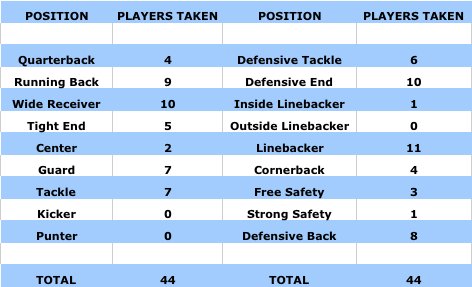 1. Prior to drafting free safety Nate Allen (South Florida) No. 37 overall last year, the Eagles had not selected a defensive back within the top 100 picks since 2004 (Matt Ware, UCLA).

Could Colorado CB Jimmy Smith be a possibility for the Eagles in the first round?

3. Over the last ten years, the Eagles have only drafted three offensive linemen within the top 100 picks.

4. The Eagles have drafted at least one linebacker within the first four rounds in four of the last six drafts. There is a very good chance that this trend will continue in 2011.

5. The Eagles have drafted a defensive lineman within the first two rounds in six of the last eight drafts.

Note: The New York Giants Draft Trends Breakdown was completed back in March. CLICK HERE to check it out!

The Dallas Cowboys are drafting in the top ten for the first time since 2003 and it will be interesting to see which direction the team is headed. Jerry Jones and Big D have used seven of their last nine first round picks on the defensive side of the football, which is where 52.4% of their selections have been spent since 2001. 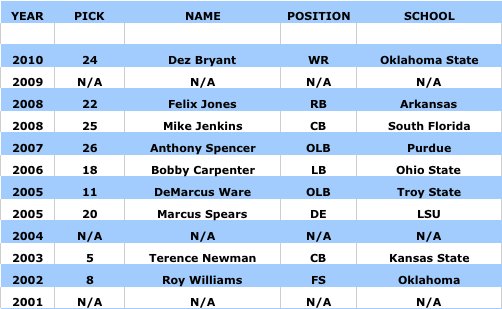 When analyzing the Cowboys’ picks by position, what jumps out at your first? For me, it’s the fact that the team has used 24.4% of their last 82 selections on defensive backs.

Take note that Dallas has drafted just as many kickers (2) as they have quarterbacks over the last ten years.

Here’s how the Cowboys’ selections break down by position since 2001: 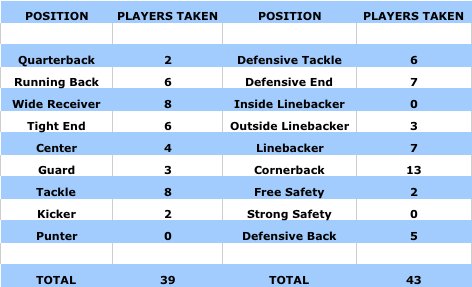 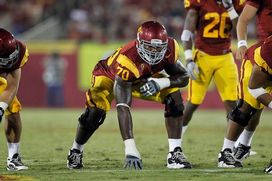 ICONShould the Cowboys draft a lineman like Tyron Smith in the first round, it would be the first time that has happened since 1981.

2. Since 2005, the Cowboys have only drafted two offensive linemen prior to the fourth round. Take note that Dallas has not selected an offensive lineman in the first round since 1981 (Howard Richards, Missouri).

When it comes to the first round, it’s hard to tell what the Washington Redskins are thinking. The team has drafted just as many offensive players (4) as defensive players since 2001, but has also been without a first round selection three times (2003, 2006, 2008) in the last ten years.

One thing that has become somewhat apparent: The Redskins like defensive backs from southern schools. 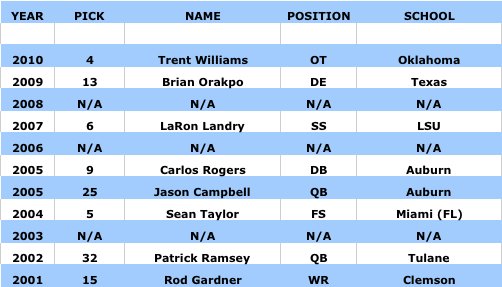 Has any team had fewer draft picks over the last ten years than the Washington Redskins? The ‘Skins have drafted six or fewer players eight times since 2001 including a league-low three back in 2003.

However, when Washington does find itself on the clock, the team likes to target the skill positions. 31.1% of the Redskins’ selections since 2001 have b een spent on quarterbacks (6) running backs (5) and wide receivers (8).

Here’s how the Redskins’ selections break down by position since 2001: 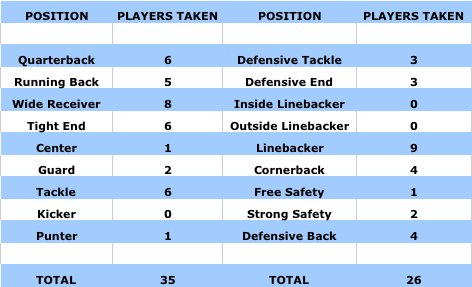 1. Since taking over in 2010, five of head coach Mike Shanahan’s six draft picks have been spent on the offensive side of the football. 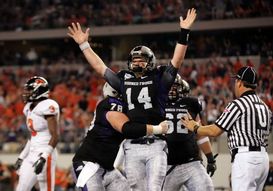 ICONWould the Redskins consider trading down for a quarterback like Andy Dalton?

CLICK HERE to check out Part I of the AFC North

CLICK HERE to check out Part II of the AFC North