Last summer the Philadelphia Eagles grabbed headline after headline during the NFL’s free agent period by signing some of the biggest names on the open market. 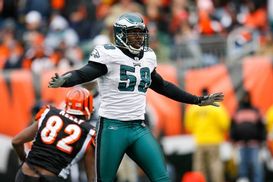 ICONCole has registered 33.5 sacks over the last three seasons.

This year, things have been a bit quieter in the City of Brotherly Love. But the Philadelphia front office made some noise Wednesday morning when the team announced it had come to an agreement on a four-year contract extension with Pro Bowl defensive end Trent Cole.

One of the fastest players in the NFL coming off the edge, Cole has recorded double-digit sack totals in four of his last five seasons and has started every game but three for the Birds since 2007.

Playing alongside fellow sack specialist Jason Babin, Cole makes up one-half of one of the league’s most lethal pass-rushing combinations. Giving him a four-year extension was a solid move by the Eagles, as the team can now turn its attention to addressing the linebacker and safety positions.