Ed Reed is headed to Houston

It took a little over a week, but free agent safety Ed Reed has officially joined the mass exodus of talent that has fled the Super Bowl champion Ravens. 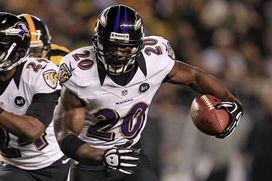 After 11 years in Baltimore, Ed Reed is leaving to join the Houston Texans.

Jason La Canfora reports that after a few days of flirting, the Houston Texans and Reed have come to an agreement on a two-year deal. Financial particulars of the contract have not yet been released, but the speculation is that the safety landed a deal somewhere in the $4 million per year range.

The move makes sense for both sides. At 34-years-old, it was expected that only a contender missing one or two key pieces would be interested in signing Reed. Any team in rebuilding mode would have gotten little—if anything—out of Reed by the time said organization was ready to make a run. For Reed, playing in Houston gives the safety a chance to make another run at a Vince Lombardi Trophy while signing what was likely the best offer on the table.

The move gives the Texans a nine-time Pro Bowler with deep playoff and Super Bowl experience, something the organization could benefit from greatly.