Four games every gambler should circle

It was Week 15 of the 2012 NFL season and some of the sharper betting minds in Las Vegas were lining up at sports books around the city to get down on the Carolina Panthers. To the untrained eye, this could have appeared as a peculiar move. Carolina was traveling all the way across the country to play a San Diego Chargers team that had defeated the Pittsburgh Steelers at Heinz Field 34-24 the week before. Meanwhile, the Panthers were just 2-4 straight-up on the road heading into their tilt with the Bolts and had covered the number in only two of their previous five games.

However, none of those aforementioned factors served to dissuade the sharps from taking the three points with Carolina. And when the dust had finally settled on that Sunday afternoon at Qualcomm Stadium, the Panthers went to the airport to fly home with a decisive 31-7 victory over the Chargers in their pocket. 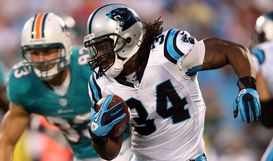 DeAngelo Williams rolled up 144 total yards and a touchdown in Carolina's blowout win over San Diego.

So what was it that made the sharps back the road dog Panthers? Simple. It was head coach Ron Rivera, who had spent 2007-2010 working under Chargers head coach Norv Turner in San Diego before taking over in Carolina in 2011.

Sure, there were some other factors in play as to why the sharps backed the Panthers. But this was the big one. Matchups like these give a team like the Panthers a distinct advantage. Since Carolina and San Diego get together only once every four years, they are unfamiliar opponents with just one week to prepare for the other team. But Rivera knew how Turner liked to think, how he liked to prepare and how he preferred to manage a game. This insight gave the Panthers an edge that was worth a bet.

Several NFL coordinators took promotions this offseason to become head coaches in new cities, just like how Rivera left San Diego in 2011 to join the Panthers. Three of those coordinators will face their old team in 2013.

Why: Former Seahawks defensive coordinator Gus Bradley is now running the show in Jacksonville and will have his team prepared for the rigors of playing at CenturyLink Field. Whether or not the Jaguars have the talent to hang tight with a Seahawks team that went 7-1 ATS at home last season remains to be seen. But Bradley knows Pete Carroll and Russell Wilson.

Why: Bruce Arians didn’t just serve as the Colts’ offensive coordinator in 2012, he took over the head coaching responsibilities when Chuck Pagano was diagnosed with Leukemia. Arians was the first NFL mentor that quarterback Andrew Luck ever had and will have the luxury of hosting the Colts in this inter-conference showdown. If Indy lives up to the hype in 2013, the Cardinals could enter this game as a home underdog.

Why: New Chargers head coach Mike McCoy worked with Broncos head coach John Fox in Carolina from 2002-2008 and then again in Denver from 2011-2012. McCoy also oversaw the transition from Tim Tebow to Peyton Manning. Be advised that the meeting in Denver takes place on a Thursday night, which gives the Chargers a short week of prep time before traveling to play a divisional opponent.