Only three quarterbacks were selected during the first three rounds of the 2013 NFL draft. E.J. Manuel landed in Buffalo (No. 16), Geno Smith went to the Jets (No. 39) and Mike Glennon found a home in Tampa Bay (No. 73).

It only took 15 selections on Saturday for the fourth round to meet that total. 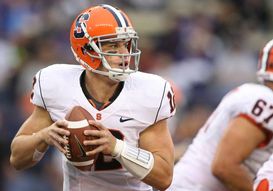 ICONNassib remains in New York where he will have the chance to study Eli Manning.

Shortly after USC quarterback Matt Barkley landed in Philadelphia (No. 98), Syracuse quarterback Ryan Nassib was selected by the New York Giants (No. 110). Two picks later, the Oakland Raiders made a move for Arkansas’ Tyler Wilson.

In New York, the 23-year-old Nassib will have an opportunity to sit and learn behind two-time Super Bowl winner Eli Manning. Wilson, on the other hand, could have a chance to unseat Matt Flynn for the starting job in Oakland.

And while we were working on a closing paragraph for this post, the Pittsburgh Steelers went ahead and snagged Oklahoma signal-caller Landry Jones with the 115th overall pick.