Garrard lands with the Jets

With Mark Sanchez headed for the dreaded “bust” designation and the Tim Tebow experiment producing nothing more than a lot of hot air, the New York Jets have once again turned their attention to the quarterback position.

Per various reports that surfaced on Monday, the Jets have reached an agreement with nine-year veteran David Garrard. 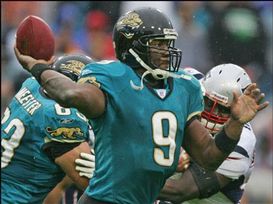 Now 35, Garrard is back in the league with the New York Jets.

Now 35-years-old, Garrard worked out for the Jets back on February 28 and apparently impressed the team enough to land a contract.

The former East Carolina signal-caller hasn’t appeared in an NFL game since 2010, when Garrard made 14 starts for Jacksonville, amassing 2,734 yards with 23 touchdowns and 15 interceptions.

He’ll have five months to try and unseat Sanchez for the starting gig.