Get off the field!

For reasons I’m sure many of you can ascertain, I spent Sunday morning with my attention fixated on the showdown between the San Diego Chargers and Tampa Bay Buccaneers. I had a vested interest in Tampa because I liked the team’s situation. The Chargers were playing the front-end of back-to-back road games in which the first matchup came against an unfamiliar, non-conference opponent seven days before the team would travel to Denver for a divisional clash with the Broncos. As we wrote back in August, this is a very favorable situation for a team in Tampa’s position.

As is the case with any pessimist who has money riding on the outcome of a sporting event, I was keenly aware of every mistake the Buccaneers made on Sunday. Most notably, Tampa—who ranks 18th in the league in third-down conversions allowed (39.5%)—couldn’t get off the damn field in the first half to save their lives.

The Buccaneers escaped with a 34-24 win (and cover!), but not before allowing the Bolts to convert a season-high 66.6% on third down. This got me thinking. How could Tampa win that game with the Chargers holding the ball for 36:41 while having so much success moving the sticks? 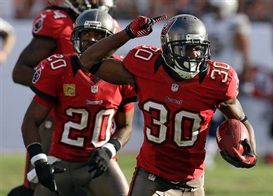 The Buccaneers defense struggled on third down, but came up big in the turnover department.

The answer, of course, is turnovers. The Bucs turned two Philip Rivers interceptions into ten points and scored a touchdown on a blocked punt in the second quarter. Those mistakes cost the Chargers a chance to pull out a much-needed road victory and negated all the success the team had enjoyed on third down Sunday afternoon.

But was this the case in every Week 10 game played this past weekend? Were other teams who dominated the third-down conversation statistic coming up short like the Chargers?

The answer to this question is a resounding no. Of the 13 games played in Week 10, teams that converted a higher percentage of their third down opportunities went 8-4-1 straight-up and 10-3 against the spread. Not surprisingly, the three ATS losers—San Diego, Atlanta and Oakland—lost the turnover battle on Sunday by a combined 6-2 margin.

As for the teams that won the battles in both the third down conversion and turnover departments, those seven organizations (Indianapolis, Cincinnati, Tennessee, Minnesota, Seattle, Dallas and Houston) went 7-0 both straight-up and against the spread.

So how does this information hold up over the long haul? I went back to take a look at the 30 teams who appeared in the last 15 Super Bowls to see how each performed during the regular season in the third down conversion differential and turnover differential categories.

Of the 30 teams that have appeared in a Super Bowl since 1998, 27 concluded the regular season with a positive third down conversion differential, while 27 finished the year at even or better in the turnover differential department.

And not one team qualified for the NFL’s biggest game by posting a negative in both categories. 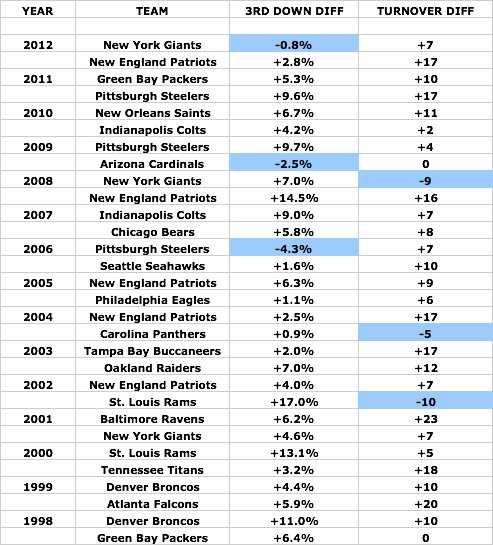 So how do the 32 teams vying for this season’s Vince Lombardi Trophy stack up after ten weeks? The following chart breaks down each team’s performance to date in both categories. The teams highlighted in blue are coming up aces in both statistics, while the teams in red have produced a negative number in both departments. 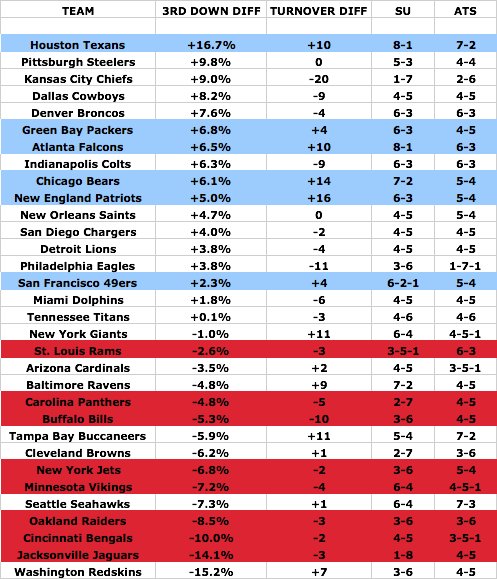 Converting on third down in the NFL is huge, while getting off the field on third down is just as crucial. Throw in a positive turnover differential and your chances of winning the Super Bowl just got a whole lot better.