They brought him in on a private plane and refused to let him leave. The Tampa Bay Buccaneers’ persistence in pursuing free agent safety Dashon Goldson has finally paid off. 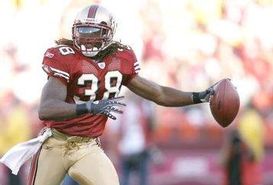 Goldson is headed to Tampa Bay on a five-year deal.

ESPN’s Adam Schefter reports that Goldson and the Bucs have come to terms on a five-year deal. Details of the agreement have not yet been released.

In Goldson, the Buccaneers acquire a hard-hitting defender who can provide an immediate boost to a defense that ranked dead last in the NFL against the pass (297.4 yds/gm) and 23rd in scoring defense (24.6 pts/gm) last season.

In Tampa Bay, what Goldson acquires is simple: He gets paid. Big time.

A six-year veteran out of Washington, the 28-year-old Goldson amassed 66 tackles with the San Francisco 49ers last year, as well as 14 interceptions over his last four seasons. The Buccaneers can pair him up at safety with 2012 top-ten selection Mark Barron (Alabama), giving the team a solid pair of backend players to match up against the passing attacks from divisional rivals Atlanta and New Orleans.

Update: Per Mike Florio of Pro Football Talk, the five-year deal is worth $41.25 million with $22 million guaranteed.