Harper gets $28 million to stay in New Orleans

Though not a household name, Roman Harper has started 62 games for the New Orleans Saints over the past four years and is a key ingredient in coordinator Gregg Williams’ multi-front, pressure-based defense. 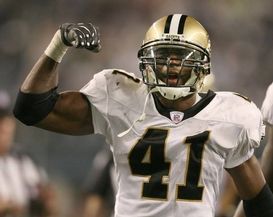 Back to the Big Easy: Roman Harper just landed a $28 million contract.

So as the New Orleans front office quietly assembles its arsenal in preparation for another Super Bowl run, it likely comes as a big relief to Saints fans that Harper and the team reached an agreement on a four-year, $28 million contract on Friday, per Mike Triplett of the New Orleans Times-Picayune.

And what we’re sure comes as more than just a relief to Harper, the new contract comes with $16 million guaranteed.

The 28-year-old from Alabama has posted 80+ tackles in each of the past four seasons. In addition to Harper, the Saints re-signed offensive tackle Jermon Bushrod, wide receiver Lance Moore and linebacker Scott Shanle, unloaded running back Reggie Bush’s contract in a trade with Miami and signed free agent dual-threat back Darren Sproles.

The Saints are currently listed at 12/1 to win the Super Bowl.