Currently ranked No. 3 in the latest BCS standings and coming off a blowout road win over the West Virginia Mountaineers, Bill Snyder’s Wildcats have something else to hang their collective hats on at the moment: Quarterback Collin Klein (-150 to -250) is currently the frontrunner to win the 2012 Heisman Trophy. 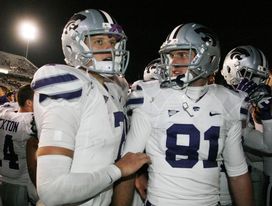 US PRESSWIREKlein (left) is in the driver's seat to win the Heisman at the moment.

Through seven games, the 23-year-old senior signal-caller is completing 70.5% of his passes for 1,397 yards and ten touchdowns, with just two interceptions. But perhaps what has Klein in the driver’s seat to win college football’s most prestigious individual award is that fact that the dual-threat quarterback has also amassed 551 rushing yards and 14 touchdowns on the ground—all while leading his Wildcats to a perfect 7-0 record.

West Virginia quarterback Geno Smith—the nation’s darling until he ran into Texas Tech and Klein’s Kansas State team in back-to-back weeks—currently checks in right behind Klein at +350 to win the Heisman. But with two losses on his resume and a November 17th showdown against Oklahoma on the horizon, Smith may fade from the race before the final candidates make their way to New York for the trophy presentation.

At this point in time, there’s absolutely no value in betting on Klein, so if you’re looking for some Heisman Trophy action, the best move is to find a player with a legitimate shot to win that is currently going off at longer odds. 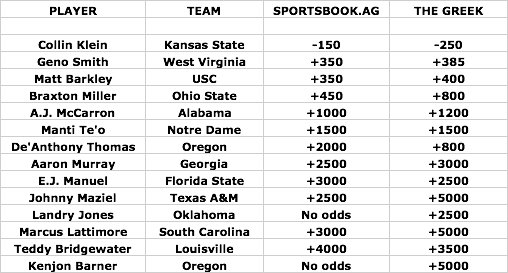