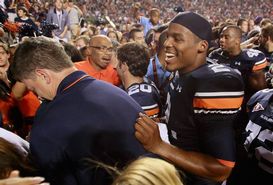 Is Cam Newton a smash to win the Heisman?

And unless a majority of the voters decide to stage a coup and boycott Newton due to NCAA allegations he faced—and of which he was cleared—earlier this season, it looks like the race is on for second place.

Since it’s damn near impossible to find a place that will book a bet on Newton to WIN the Heisman Trophy, we’ll have to turn to the next best thing…

Here are four Heisman Trophy prop bets that are currently being offered over at Sportsbook.com:

Who will finish higher in official Heisman Trophy voting?

Who will finish higher in official Heisman Trophy voting?

Have a gut feeling on how the voting will shake down Saturday night? Post it in the comments section.