Hot tub era coming to a close in the desert?

That six-year contract with a max value of $50.8 million Cardinals quarterback Matt Leinart signed in August of 2006 is beginning to look like pure robbery. 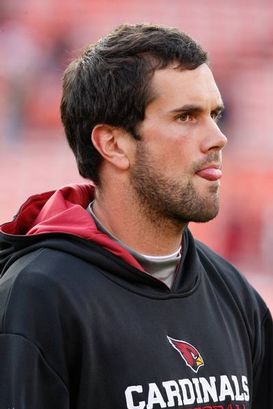 ICONIs Leinart's time in Arizona coming to a close?

Why, you ask? Because the former top-ten draft pick is on his way back to the bench for the second time in the last three years.

Our old pal Michael Lombardi of the NFL Network reported Wednesday that the Cardinals could be considering dumping or trading the former Heisman Trophy winner.

Shortly after Lombardi’s report, Arizona head coach Ken Whisenhunt announced that former Browns quarterback Derek Anderson will start for the Cardinals this Saturday night when they head to Chicago to take on the Bears.

Whether or not Leinart will be on the Cardinals’ roster come Week 1 remains to be seen. But he certainly won’t be leading the starting offense this weekend in Chicago.

The move to send Leinart to the bench comes just three days after the former USC standout put together his second consecutive sub-par preseason performance. In two games this August, Leinart has completed just 10 of 13 passes for 77 yards with no touchdowns.

In addition, Leinart has failed to lead a single scoring drive this preseason.

The job is now Anderson’s to lose, which is good news for Cardinals fans because their team now has a guy who has won some games in the past leading the offense.

You think Sage Rosenfels or Tarvaris Jackson are somewhere in Minnesota waiting for a phone call?