The presumption of innocence is a legal right in this country afforded to the accused in a criminal trial. In essence, you are innocent until proven guilty. The burden of proof in such proceedings falls on the prosecution to compel the judge or jury that the accused is guilty beyond a reasonable doubt of the crime or crimes for which he or she is standing trial.

Should New England Patriots tight end Aaron Hernandez eventually be brought to trial for a crime or crimes allegedly committed relating to the death of semi-professional football player Odin Lloyd, the 23-year-old former Florida Gator will be protected under this right.

Whether or not the presumption of innocence in Hernandez’s potential case is viewed as anything other than an inconsequential formality is another story.

At the current moment, Aaron Hernandez is scrambling across the deck of a ship that is taking on water. According to a multitude of reports, Hernandez and two other men were in a car with Odin Lloyd the night Lloyd was murdered. Lloyd’s body was subsequently discovered in an industrial complex approximately one mile from the New England tight end’s North Attleborough (MA) home. ABC News reported on Thursday that Hernandez destroyed his home security system, turned his cell phone over to police “in pieces” and hired a professional cleaning company to scrub his house this past Monday.

Do innocent men run from the police? Does an innocent man destroy his cell phone and security system in what could be perceived as the moments leading to an arrest? Do these questions even matter?

The court of law and the court of public opinion are two very different things. At this point, it’s important to note that Hernandez has yet to be charged with a crime relating to the death of Odin Lloyd. Therefore, it’s virtually impossible to tell if or when Hernandez will even face a judge and jury. 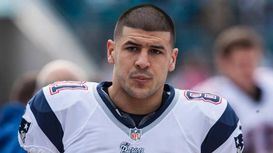 In the court of public opinion, Aaron Hernandez has already been found guilty by many.

But that hasn’t stopped the court of public opinion—which includes this writer—from bypassing the presumption of innocence in favor of a quick and decisive verdict. The evidence mounting by the minute against Hernandez looks bad. But we’ve only heard one side of the story. And the information trickling out from that side has been limited.

What if Hernandez is innocent of any wrongdoing relating to Lloyd’s death? What if the three-year veteran is simply remaining silent in an effort to protect the other two men who were riding in the same car on that doomed night? What if Hernandez is just a scared 23-year-old kid who destroyed his phone and security system in a moment of panic without thinking of the consequences?

Just over two months ago, a series of horrific acts unfolded before our eyes in Boston during the 2013 running of the city’s famous marathon. We reacted almost instantaneously to everything we saw and everything we heard without so much as a second thought regarding the veracity of the reports that were rocketing our way. And when one of those Boston Marathon reports would turn out to be incorrect, we’d bash the media outlet for their mistake without assuming any responsibility on our own behalf.

That’s what happens when everything and everybody is connected. It all moves faster. News, opinions, judgments and jokes. Be first or be last.

Aaron Hernandez is entitled to the presumption of innocence, but that doesn’t mean the presumption of innocence is without flaws. A person standing trial is viewed as guilty by somebody, otherwise that person wouldn’t be standing trial. Did we presume O.J. Simpson to be innocent of killing his wife and Ron Goldman? Whether you did or did not, the legal process ran its course and the jury declared Simpson to be innocent of any wrongdoing. Does that mean somebody else killed Goldman and Nicole Brown Simpson, or does that mean the justice system got it wrong?

The longer damning evidence continues to surface linking Hernandez to Odin Lloyd’s murder, the less likely it will be for the 23-year-old to find an impartial jury, should the legal process reach that point. Impartiality is an impossibility in high-profile criminal trials in the day and age of twitter and facebook. People are told something and, as a result, they form an opinion or belief. Many of us are doing that at this very moment.

But that doesn’t mean we should abandon the longstanding belief that a person is innocent until proven guilty. At the very least, we should simply perform the one act that so many of us are unwilling to do in this day and age: Exercise patience and wait for all of the facts.