Inside the Vegas point spread

Last Saturday we kicked off the NFP’s new “Point Spread Series” by talking to Marco D’Angelo of Pregame.com about the first half of the college bowl season schedule.

Marco is set to join us next week for another podcast in which we’ll break down the second half of the bowl season schedule, but until then, we figured it was time to take a look at what the pro handicappers are thinking heading into Week 16 in the NFL.

I spoke with veteran handicapper “Vegas-Runner” this past week to get his take on five of the biggest games on the Week 16 schedule. VR has been featured on CNBC television and is used regularly as a source for ESPN.com, so you know he’s legit.

Here are his thoughts regarding the line movements for five of the biggest games on the Week 16 schedule. If you’d like to check out more of his work, you can CLICK HERE. You can also follow VR on Twitter: @VegasRunner.

Take out your pens and a piece of paper, because you’ll want to write some of this stuff down.

Recent Trends (ATS: against the spread) 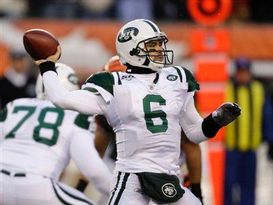 Vegas-Runner drops it: “This line opened anywhere from Chicago -1 to -1.5 and was instantly bet up all the way to -2.5, before coming back down to -1. The initial push by the wise guys on Chicago was based on the shoulder injury to Jets quarterback Mark Sanchez, who is now listed as "probable" and is expected to start. The books expect plenty of two-way action from the betting public, so you can be sure that any move from now until kickoff will be sharp money related. And from the information that I've gathered, I expect the wise guys to come in and STEAM the Bears again as a true position.”

Vegas-Runner drops it: “Definite difference of opinion on the price of this game because we saw the line open from as low as Patriots -7.5 to as high as -9. And as of Thursday morning, the market had yet to settle on a price as bettors can still find BOTH of those numbers out there. Buffalo has covered two of their last three games vs. New England, losing by eight or less in all three outings. Here is another side (Patriots) that will be included in plenty of "exotics" (Teasers/Parlays) on Sunday and it's obvious that most books prefer forcing teaser bettors to lay a field goal or worse to back the Pats. So I expect those who are still at NE -7.5 to follow the others and adjust upwards, especially since the wise guys don't seem to be wanting either position.” 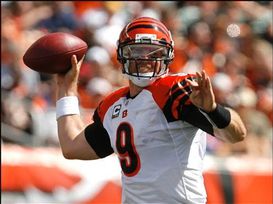 Do Palmer and the Bengals have anything left in the tank?

Vegas-Runner drops it: “This line opened with the Chargers as a 7-point road favorite, but has since moved off that key number and is sitting at 7.5 across the board. This game features a simple case of the wise guys racing to get out ahead of the betting public, who is expected to come in heavy on the Chargers on game day. When the majority of public money gets wagered, that pressure—along with plenty of exposure from exotics on San Diego—should force the books to adjust this line some more, ultimately opening a "middle" opportunity for those who laid -7 early to come back and grab the points with the Bengals late, since this price will only increase.” 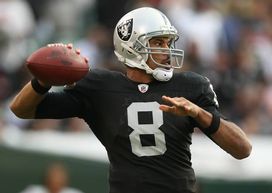 ICONCampbell and the Raiders have a big date with Peyton Manning on Sunday.

Vegas-Runner drops it: “This line opened anywhere from Indianapolis -2.5 to -3 and it's now obvious that the wise guys like the home dog in this showdown. Why? Because rather than take the chance of allowing the betting public—who the books expect to back the Colts strongly—to possibly force an adjustment off that key number of 3 (which would ultimately offer a better price on the Raiders) they instead went ahead and grabbed Oakland +3 where available. That tells us that this is a definite position they believe offers some betting value on the Raiders as home dogs. With that said, there should be more than enough public money coming in on game day to allow the books to push this back up to that key number of -3, forcing bettors to take what sharps believe is the worst of it.”

Vegas-Runner drops it: “This line opened anywhere from Atlanta -2 to Atlanta -3 and with "3" being a very key number in football, the Betting Syndicates went ahead and grabbed +3 on the Saints. This is a move based on "Line-Value" because of that key number, which is evident from the fact that the wise guys weren't willing to grab +2.5 when the books moved off 3. The books expect two-way action on this Monday night game and from what I’ve gathered, I won’t be surprised if the sharps come right back and lay the points with Atlanta as we approach kickoff.”