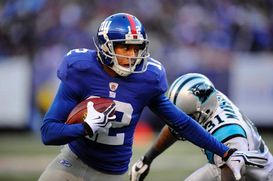 Steve Smith hopes to return to practice in Week 1.

The only problem is that Smith is coming back from microfracture surgery on his left knee and won’t be ready for the start of the season. However, the Eagles now—at the very least—have an idea of when Smith will return to the practice field.

Speaking to reporters after Monday morning’s practice session, Smith said he expects to begin practicing with the team “maybe” during Week 1, according to a tweet from Jeff McLane of the Philadelphia Inquirer.

With Pro Bowl receiver DeSean Jackson now back in the fold after a brief contract holdout, the Eagles aren’t exactly hurting at the wide receiver position. Five-year veteran Jason Avant is coming off a career-high 51 receptions while second-year wideout Riley Cooper hauled in a 42-yard reception that set up a touchdown in Philly’s first preseason game last Thursday evening.

Still, it wouldn’t hurt if either Smith or Maclin (or both) found their way onto the field as soon as possible for a team that many expect will reach next February’s Super Bowl.