It was a busy weekend in Las Vegas

It didn’t take long for the big dogs in Sin City to follow the lead set by our neighbors to the north. Just over one week after the Atlantis sports book in Reno became the first shop to enter the 2013 NFL season win totals market, Cantor Gaming (Friday) and the LVH SuperBook (Sunday) joined the party with their own opinions.

In addition to posting season win totals on Sunday, the LVH also hung lines for 80 NFL games played between Week 2 and Week 17. You’ll find the full rundown at the end of this article.

So the calendar hasn’t even flipped to June and we already have an opinion from three different sports books on each of the 32 NFL franchises. The most intriguing number at the moment? Well, that would be the Green Bay Packers. The Atlantis hung Aaron Rodgers and company at 12, but adjusted south prior to Cantor and the LVH coming out with a lower total.

Before we get to the complete breakdown, take note of the following:

One for the road…

17 weeks of NFL action produces a grand total of 256 games. That means 256 winners and 256 losers. Add the 32 win totals from our three sports books and you get the following:

UNDER 7 wins New York Jets (-110, Atlantis): I loved it at 7 and am still willing to play it at 6.5 (-110, LVH). The Jets followed up a 6-10 campaign in 2012 by getting worse from a personnel standpoint this offseason. Sure, the Tim Tebow drama is a thing of the past, but how exactly does Gang Green plan to improve on last season’s 17.6 points per game average (28th in NFL)? Darrelle Revis is now in Tampa and without him this defense is a far cry from the unit that used to bail out the offense back in 2009 and 2010. 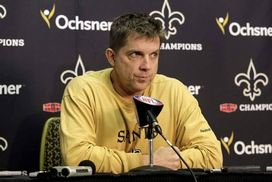 Sean Payton's return to the sidelines will mean big things for the Saints in 2013.

OVER 9 wins New Orleans Saints (-115, Cantor): Go 4-2 within the division, come up victorious in home games against Arizona, Miami, Buffalo and Dallas and then find a way to grind it out on the road against the Jets and Rams. That gives you ten wins right there. Getting San Francisco at home and Chicago on the road in early October are big plusses.

OVER 6.5 wins Kansas City Chiefs (-110, Cantor): I’ve never been a big Alex Smith fan, but the guy is still 100 times better than the rotating collection of stiffs that have occupied the quarterback position in Kansas City over the last few seasons. Between stability and experience at quarterback along with my belief that Andy Reid’s offense gets big results from Dwayne Bowe and Jamaal Charles, I’m willing to back the Chiefs getting to seven wins. Hell, it’s not all that crazy to think Kansas City goes 4-0 against Oakland and San Diego. Speaking of the Raiders…

UNDER 5.5 wins Oakland Raiders (-110, Cantor): I’m going to spend more time researching the Silver & Black over the summer, but the bottom line is that when I look at the Oakland schedule, I have no clue how this organization gets to 6-10. Road games at Denver, Kansas City, the New York Giants, Houston and Dallas look daunting, as do home showdowns with Denver, Indianapolis, Washington, Pittsburgh and Philadelphia.

OVER 6.5 wins Miami Dolphins (-120, Cantor): Miami went 7-9 last season with a rookie quarterback, first-year head coach and virtually no firepower on the offensive side of the football. Enter Mike Wallace, an upgraded defense (Dannell Ellerbe, Phillip Wheeler, Dion Jordan) and a signal-caller in Ryan Tannehill who will be better in 2013 than he was in 2012. Four games against the Jets and Bills along with winnable matchups that include Cleveland, Tampa Bay, San Diego and Carolina all look very appealing for over bettors.

CLICK HERE to check out the opening NFL point spreads from Cantor Gaming.