It's official: Vince Young is an Eagle

At this point you have to wonder when the last time was that anybody in the Philadelphia front office got some sleep. 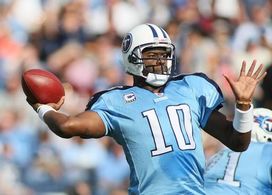 ICONVince Young is headed to Philly to join a loaded Eagles roster.

The move gives the Birds a legitimate backup with starting experience in the event something happens to Michael Vick, while Young gets an opportunity to rebuild his career under head coach Andy Reid.

As long as Young is ready to put in the work.