Believe it or not, the first weekend in six months without football brought what could very well turn into the biggest sports story of the year—football or otherwise.

NFL hopeful Michael Sam, a 24-year-old defensive lineman from the University of Missouri, publicly declared that he was gay to the New York Times Sunday evening.

Let that soak in for a moment.

On Sunday, Michael Sam took what many will consider to be the gamble of a lifetime, but what should be remembered as one of the most courageous decisions this country has seen in quite a while. With the NFL draft scheduled to take place in approximately three months, Sam had every reason in the book to keep his private life private in order to prevent jeopardizing that all-important “draft stock” we hear so much about this time of year. After all, draft season has a habit of turning highly-skilled collegiate football players into lab rats.

And establishing oneself as the first openly gay football player in NFL history? Well, yeah, that could certainly drop your stock, too. Especially if the individuals tasked with making draft day decisions conclude that Sam’s presence in the locker room could pose some sort of problem.

Say, a similar type of problem that many projected would come with drafting Notre Dame linebacker Manti Te’o? 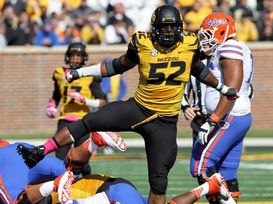 Sam amassed 11.5 sacks in 14 games for the Tigers last season.

While we’re on the subject of Te’o, how’d that work out for the Chargers? Last I checked, a team that was predicted to do very little during the 2013 season went 9-7 en route to a spot in the Divisional Round of the NFL playoffs. A season, mind you, without one report surfacing out of Southern California crediting Te’o or his off-the-field collegiate issues as a distraction.

But the reality is that nobody needs to hypothesize whether or not an openly gay football player works in the NFL. If the guy can play, the guy can play. And if the NFL is true to the draft maxim, “Best player available,” then the SEC Defensive Player of the Year should have no trouble finding work next fall.

For those who may disagree, look no further than the University of Missouri and the football team that worked with Michael Sam over the last four years. According to the New York Times, Sam came out to his teammates prior to the start of the 2013 season.

Dozens of individuals who this country declares too young to legally consume alcohol banded together to turn a 5-7 football team in 2012 into a 12-2 Cotton Bowl winner in 2013…with Sam’s 11.5 sacks pacing the charge.

Those individuals, those kids, shared the same locker room with Michael Sam. They knew his deepest, darkest secret. Those kids knew something private about Michael Sam that at least a few NFL evaluators believe could tear a locker room apart. After all, many feel that the NFL isn’t ready for an openly gay football player.

Perhaps the University of Missouri wasn’t ready for an openly gay football player, either. But prior to the start of the 2013 season, the Tigers found out that’s exactly what they had in the locker room.

And all the University of Missouri did afterwards was win 12 games, play for the SEC Championship and publicly stand up for their openly gay teammate when he decided to let the rest of the world in on his secret.

If a group of amateur teenagers and 20-somethings could work with a gay teammate, it’s not that far-fetched to believe a platoon of highly-paid professionals could do the same thing. All they need is a chance to show it. All they need is a shot to set an example for the rest of the world.

Perhaps all they need is an opportunity to work with Michael Sam.